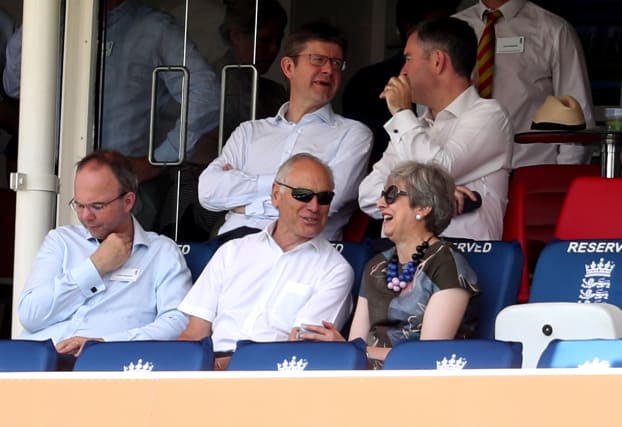 Theresa May enjoyed a moment out of the sun while watching England’s cricket team at Lord’s just a day after she bowled out of Number 10.

The former prime minister was waited on in the hospitality section at the central London ground as the nation’s test team tried to recover from a first-innings collapse against Ireland.

Any early hopes she might have had of England rallying were dashed slightly when the visitors’ wicket-keeper Gary Wilson provided the perfect Irish backstop to catch out Rory Burns with the hosts on just 26 runs.

Wearing her trademark Frida Kahlo bracelet and a large-beaded necklace, Mrs May smiled as she was handed a drink garnished with a lemon slice in a shaded area of the ground.

She was joined by Conservative colleagues David Gauke and Greg Clark, who left their respective roles as justice and business secretaries during her successor Boris Johnson’s Cabinet reshuffle, as well as her chief of staff Gavin Barwell and Colin Graves, chairman of the England and Wales Cricket Board.

Just last week, Mrs May hosted a reception at Downing Street to congratulate the men’s one-day cricket team for lifting the World Cup after a dramatic finale against New Zealand.

She looked relaxed that the test team appeared to be on a sticky wicket, perhaps relieved to be away from the jeering and shouting of the House of Commons as Mr Johnson made his first speech from the despatch box.

The cricket-loving Maidenhead MP follows one of her Tory predecessors in seeking solace in the sport after leaving office.

John Major, whose love of cricket saw him write a history of the sport, went to The Oval on the day after he lost the election which saw Tony Blair replace him in Number 10 in 1997.

Mr Major wore dark glasses and sat in his shirt sleeves in the warm sunshine, watching from the pavilion as his beloved Surrey took on the British Universities in a one-day knockout cup match at the south London ground.