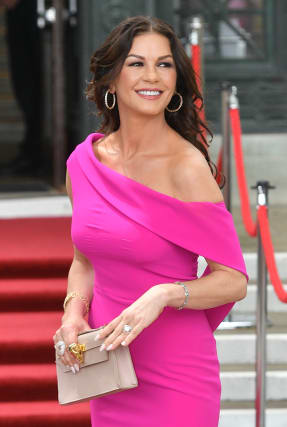 Catherine Zeta-Jones has been awarded the Freedom of Swansea during a ceremony in her home city.

The Welsh actress was joined by husband and fellow Hollywood star Michael Douglas for the occasion in honour of her role as an ambassador for Swansea.

On Wednesday, Zeta-Jones thanked family and friends in attendance at the city’s Guildhall and described the ceremony as an “incredible honour”.

She said: “Wherever I’ve gone in the world I’ve spread the word of where I came from, how I got there, and I really could never be there without the love and support of so many people who are here today in this chamber.

“Starting with all my family and friends who, with their unconditional love, guided me on my way, but always drew me back home where I could be the normal Catherine and retain morals and standards I was brought up with here in Swansea bay.”

The New York-based actress, 49, is the second woman to receive the honour, and the first in the last 100 years.

Only 50 people have been given the Freedom of the City and County of Swansea in the last 100 years, including the Prince of Wales, football legend John Charles, United States president Jimmy Carter and the former Archbishop of Canterbury Rowan Williams.

In attendance were her parents David and Patricia, who still live in Swansea, husband Douglas, 74, and their son Dylan, 18, while their 16-year-old daughter Carys was unable to attend as she was studying in Spain.

Zeta-Jones told the press conference following the ceremony she felt like “a different Catherine” whenever she was back in her home city.

She said: “There’s a public persona that actors have which is a protective barrier which is a performance in a way, and behind close doors or when you go to your home town or surrounded by family you are inherently different.

“I think that’s what keeps you grounded. As wonderful as that life and world is it’s nothing without your family or your loved ones and that feeling of belonging and coming from somewhere. It makes it that more glorious.

“I get spoiled when I come to Swansea. My mother makes a cup of tea every 20 minutes, I’ve got Welsh cakes on the side, I had fish and chips the first night we came.”

Zeta-Jones and her family have been in Wales since the start of the week and were pictured at Langland Bay Golf Club in Gower, Swansea, where Douglas was joined by his wife’s family for a round of the course on Monday.

The PGA director of golf at Langland Bay, Andrew Minty, said he was asked to play with the actress’s father and brother, who are club members, as well as Douglas before they were joined by Zeta-Jones.

Mr Minty said: “It is no surprise to me that Catherine is getting Freedom of the city.

“She is such a lovely, kind person and a fantastic ambassador for Swansea and Wales. This is thoroughly well-deserved. Myself and everyone at Langland Bay Golf Club are delighted for her.”