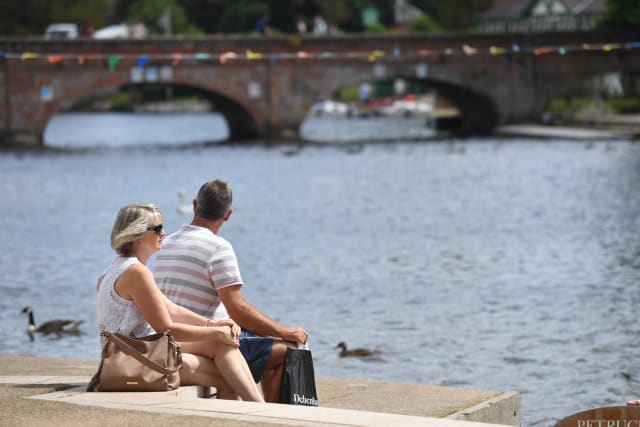 Thunderstorms could lead to travel delays and power cuts as the UK edges towards potentially its hottest July day.

Scattered patches of lightning, hail and winds are predicted to push up from south-west England and move north from Tuesday evening, according to the Met Office.

A yellow severe weather warning covers most of England, Wales, and Scotland and lasts from 6pm on Tuesday until 9am on Wednesday.

The Met Office warned there was a “slight chance” of homes and businesses losing power, along with a “small chance” of houses being damaged.

It added there was a “small chance” driving conditions could be made worse by spray or hail, making car and bus delays possible.

It comes as the mercury is due to soar above 30C (86F) on Tuesday and forecasters predict temperatures of up to 37C (96.8F) before the end of the week.

Public Health England has renewed warnings about the heat, urging people to keep hydrated, find shade and take protection against the sun.

Met Office forecaster Marco Petagna said: “On Thursday we’ll see an east and west spli,t with showers in the western parts of England but the eastern parts will look very hot with 36C to 37C (96.8F).”

He said there was a 60% chance Thursday’s weather might surpass the current July record of 36.7C and a 30% chance of going over the all-time UK temperature record of 38.5C (101.3F) which was recorded in Faversham, Kent, in August 2003.

Temperatures will creep towards expected highs of 34C (93.2F) in London, although thundery showers are expected to hit Bristol in the evening and into the early hours of Wednesday.

It will not be wall-to-wall sunshine in Scotland, either, with Glasgow due to experience heavy showers on Tuesday.

He added the coolest areas will be in western England.

He said: “The temperatures will still be in the 20Cs so still fairly sunny but this part of England will be the coolest out of the rest.”

In central and eastern parts of England, heatwave thresholds – which vary between 25C and 28C (82.4F) across the country, acting as a benchmark for determining whether the meteorological phenomenon has been reached – are expected to be met as high temperatures persist for three days or more.

The temperatures will remain high, thought to be about 24C (75.2F), overnight into Wednesday, making it uncomfortable for some people to sleep.

Public Health England said the heat should prompt people to drink plenty of fluids, avoid excess alcohol and open windows when it feels cooler outside.

Nobody should ever be left in a closed, parked vehicle, especially infants, young children or animals, it added.

And it said people should avoid the sun between 11am to 3pm but, if they do go out, they should walk in the shade, apply sunscreen and wear a hat.

Other tips include avoiding physical exertion in the hottest parts of the day and wearing light, loose-fitting cotton clothes.

The Dogs Trust charity also advised owners to not leave pets alone in a hot car seat even for a few minutes.