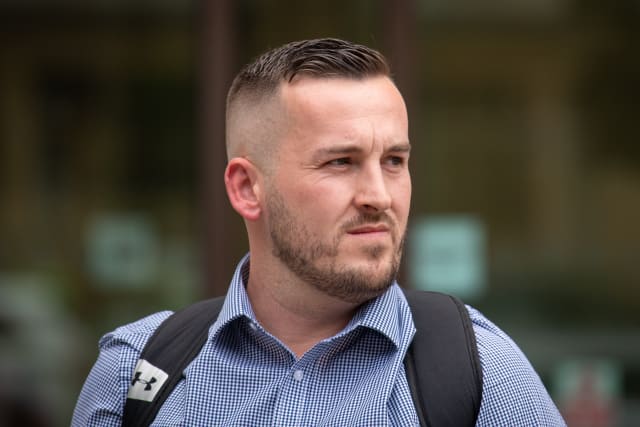 The pro-Brexit campaigner, 30, was handed an eight-week jail sentence, suspended for a year, after he was filmed calling the former Conservative a Nazi and a traitor in December and January.

He was also handed a five-year restraining order banning him from contacting Ms Soubry and told he cannot enter an area including Parliament Square, College Green, the Palace of Westminster, Portcullis House and Downing Street, and was ordered to pay Ms Soubry £200 compensation and £215 in other court costs.

Chief Magistrate Emma Arbuthnot, who had already indicated he would not be sent to jail, said Goddard’s protest group had acted “like a pack pursuing its prey”.

“What is striking from the video is how long this goes on for. It was a sustained and relentless tirade,” she told Goddard.

“You say you were demonstrating for a political cause you feel passionately about, but at no point do you attempt to engage in a debate. You engage in bullying behaviour.”

The district judge said Ms Soubry had shown “great courage” but was “vulnerable” because of the circumstances.

Another clip captured protesters hurling abuse as she made her way into the Palace of Westminster in January after a live television interview in which she struggled to be heard above protesters’ insults.

In a victim impact statement, read in court on Friday, Ms Soubry said she was “really intimidated” and “very shaken by what happened”.

“I have developed a mechanism for cutting off large parts of my emotions,” she said. “I was disorientated, I felt intimidated and harassed.”

Goddard pleaded guilty to one charge of using threatening, abusive or insulting words or behaviour with intent to cause Ms Soubry harassment, alarm or distress.

He also admitted a separate racially aggravated public order offence towards a police officer and was ordered to pay £200 compensation.

Video footage played in court showed Goddard, who describes himself as an “independent journalist”, calling Lithuanian-born Pc Mindaugas Sciukus a “nonce” before telling him: “You ain’t even f****** British.”

He also shouted “every one of you is fair game” and “you want a war, I will give you one” at police before targeting Ms Soubry on January 7, the court heard.

Despite admitting the charge, Goddard objected from the dock to the use of the words “racially aggravated”, telling the bench: “It’s not racist, it’s a nationalist comment. He’s white like myself so how can it be racist?”

Dominic Thomas, defending Goddard, said his client had suffered personally since “Ms Soubry has plainly made a case of him”, adding that it had caused Goddard “some difficulty with his daughter and in his home”.

“He has taken on board, in what can only be described as the full public glare, the fact that he has crossed, so far as the criminal courts are concerned… the line,” he said.

“There is another side to Mr Goddard. He is not just a criminal thug as he has been characterised by some.”

Phillips, a grandfather, was sentenced to four weeks’ imprisonment, suspended for a year, after pleading guilty to the charge relating to Ms Soubry, and was ordered to pay £200 in other court costs.

He also received the same restraining order and was handed a curfew.

His lawyer, Beth O’Reilly, said he was a “committed Brexiteer” who suffered from a mental health condition and he “accepts he crossed the line”.

Goddard, whose previous court appearances have seen outbursts from the dock and the public gallery, has six previous convictions for seven offences, including a racially aggravated harassment conviction in 2011.

He was last month fined £300 after being convicted of assaulting a photojournalist at a demo in Manchester.