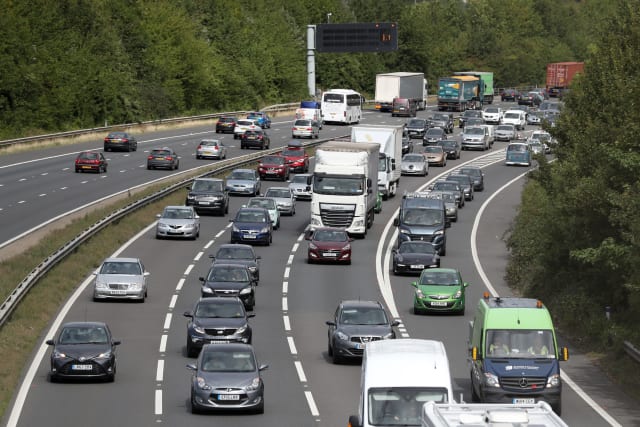 Severe traffic jams are expected on popular routes as many school terms end and the busiest summer getaway for five years begins.

The worst queues are likely to be on parts of the M25 and the M1, with delays of up to one-and-a-half hours.

Some 13.4 million leisure trips are set to take place by car between Friday and Sunday, a survey by the RAC and traffic information supplier Inrix indicated.

This is around four million more than the same weekend in 2018 and would represent the biggest summer getaway since 2014.

AA Patrol of the Year George Flinton warned that “preparation is key” and urged motorists to take time to check their vehicles, plan their journeys and pack essentials before setting off.

He said: “Motorways, coastal routes and roads to ferry crossings, airports and the Channel Tunnel are likely to be busy. If you can, set off early to beat the queues or wait until later to miss the daytime heat.”

Rail journeys will also be disrupted as a 16-day closure of a major junction on the West Coast Main Line begins on Saturday.

Network Rail is carry out major upgrades of track, signalling and overhead lines at Acton Grange junction, which is located between Crewe and Preston.

This means journeys between London Euston and Scotland will take longer, with rail replacement buses in use for some sections.

It is also one of the busiest weekends of the year for travel companies, with many families jetting off on holiday as soon as school terms finish.

Travel trade association Abta said Spain remains the number one destination and there is also strong demand for Bulgaria, Croatia, Turkey and Morocco.

Families looking for a last-minute deal are advised to head to the Greek islands, the Canaries and Italy’s Amalfi coast for some of the best deals.

Abta chief executive Mark Tanzer said: “Thousands of families will be jetting off this weekend as the majority of schools in the UK start their summer break.

“Good temperatures and sunshine are guaranteed at all our favourite hotspots around the Mediterranean and Abta advice is to slap on the sun cream and copy the locals by heading for a long, leisurely lunch when the sun is at its strongest.

“The roads in the UK will be very busy and families should leave extra time to get to their departure ports and, if using public transport, check in advance for any engineering work.”

Thomas Cook Airlines has 244 outbound flights to 47 destinations this weekend, with more than 54,000 holidaymakers taking to the skies.

Dean Thomas, of Thomas Cook Group, said: “This weekend officially marks the start of summer, but for our teams in resort it’s the culmination of months of training and preparation to make sure everything is ready for holidaymakers when they step off the plane.”

Air traffic control provider Nats is predicting 2019 will be the busiest summer on record, with more than 8,000 flights per day in UK airspace.

EasyJet’s UK director, Neil Slaven, said the summer getaway “continues to grow and this year is no exception”, with more than 300,000 passengers travelling on its planes on Friday.