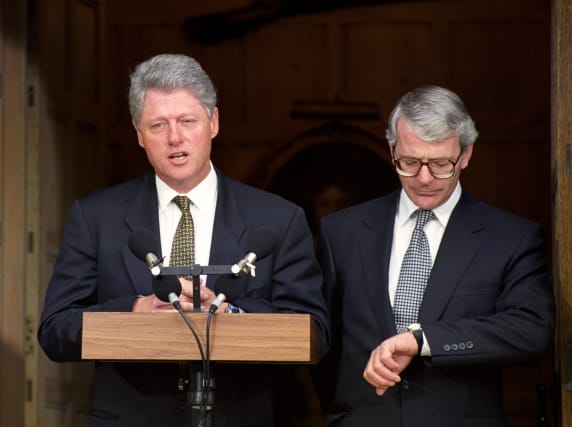 President Bill Clinton was “concerned about the treatment” he was receiving in the British press ahead of a visit to the UK in 1994, previously confidential files show.

Robin Renwick, Britain’s former ambassador to the US, informed the Foreign Office in a series of cables that “personal stories” had “taken their toll” on Mr Clinton’s popularity, particularly allegations he had harassed former Arkansas state employee Paula Jones.

The established practice of diplomats sending confidential memos back to government officials resulted in Sir Kim Darroch quitting his position as Britain’s ambassador to the US after comments he made that Donald Trump’s White House was “uniquely dysfunctional” and “inept” were leaked, resulting in a barrage of criticism for the US president that made his position untenable.

While not as critical, Mr Renwick’s dispatch from May 1994 ahead of the Clintons’ visit describe how the president had endured a “roller coaster ride” in recent times.

He said: “Clinton continues to have difficulty winning the approval of more than 50% of the American people and that could be constant throughout his presidency.

“The president has some solid legislative achievements to his credit, the reduction of the deficit budget, the passage of Nafta (North American Free Trade Agreement) and the tightening of the laws on gun control.”

He said Mr Clinton was “convinced he has established a good relationship” with British prime minister John Major, but “has been concerned about the treatment he has been receiving in the British press where most of the coverage, including in the supposedly serious newspapers, has been dominated by Whitewater and Paula Jones”.

Mr Renwick wrote: “I have told him that he will get a very different reception from the public.”

The Whitewater affair was a failed property project the Clintons invested in, but they were cleared of wrongdoing.

Ms Jones alleged in 1991 that Mr Clinton propositioned and exposed himself to her and in 1994 she filed a sexual harassment lawsuit against him.

Mr Clinton’s lawyers tried to have the lawsuit dismissed and in November 1998 he paid Ms Jones 850,000 US dollars to settle the case without apologising or acknowledging culpability

The files also disclosed a note between Washington and London in which an American aide said locals were referring to the arrival of several helicopters at Chequers as Apocalypse Now In Wendover.