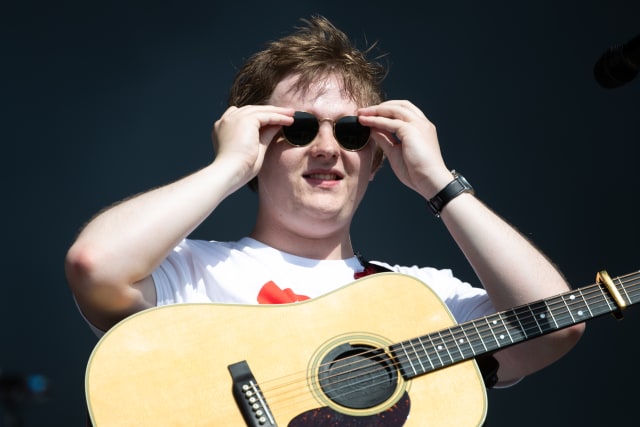 Lewis Capaldi has said he would “love” to collaborate with Noel Gallagher despite an apparent spat between the pair in the last few weeks.

The Scottish singer-songwriter was speaking at TRNSMT festival in Glasgow, where he is performing on Sunday, and said both he and the former Oasis man enjoy a “bam up” – a Scottish phrase for a wind-up.

Capaldi has shot to fame in recent months and a clip of Gallagher asking who he was went viral – to which the Scot responded on his social media enjoying the criticism.

Gallagher went on to call him “Chewbacca” and label Scotland a “third world country” – but that wouldn’t stop the 22-year-old teaming up with the music legend.

He said: “I’d love to just… me and him get in there. He doesn’t like co-rights so probably wouldn’t, but he can write it and I’ll sing it and I’m sure it would be a lovely one.

“I too enjoy a bit of a bam up although maybe I wouldn’t call a country a third world one at that but I thought it was funny.”

Earlier in the year Capaldi toured with Bastille, who told PA about the change in dynamic when the Scot “went from the next big thing to the biggest thing in the world”.

Capaldi responded, saying: “I don’t know about that, I definitely put on weight during that tour that’s probably the only thing that grew.

“It was weird, it was kind of cool that I got to share that experience of the song kind of climbing up the charts with them on that tour.

“Obviously they’ve done it all in terms of having a song go that big. They were so genuinely pleased for me which was nice as well.”

Although he lives in Bathgate now, with his parents, he was originally born in Glasgow and was called upon to play the festival after Snow Patrol pulled out just weeks before.

On Friday at TRNSMT, Stormzy covered his hit Someone You Loved while Richard Ashcroft also gave the Scot a shoutout from the main stage on Saturday.

Capaldi said: “The Ashcroft thing I just found out 10 minutes ago. I’m going to have to go look and see it because I don’t believe that Richard Ashcroft knows who I am – it’s a weird one to comprehend.

“It’s just a kind of mark of how mad my life has got over the last little bit.

“The Stormzy thing was just emotional to watch because… (I’m a) massive Stormzy fan, in Glasgow where I’m from.

“Just seeing all the people sing the song back and that, and I’m not even in the country at this point. Well I was in London. It was just so weird to see it, it spun my nut a bit.