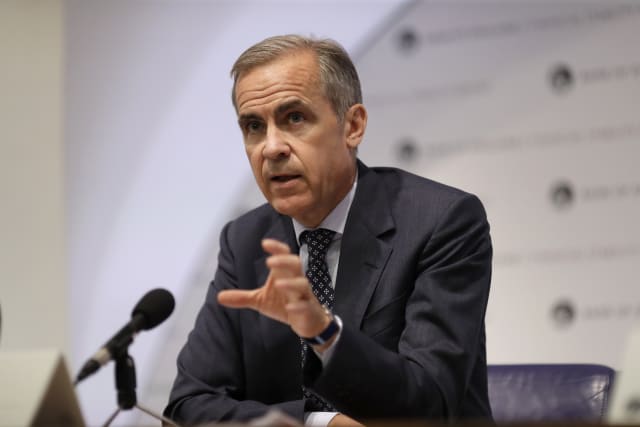 Mark Carney’s statements that the UK economy could withstand a no-deal Brexit saw a rebound in the pound, which weighed down on the FTSE 100, pushing it into the red.

Mark Carney said Britain’s lenders could withstand the worst-case no-deal Brexit and a full-scale global trade war, helping to lift the value of the pound and subsequently weaken the FTSE.

Connor Campbell, financial analyst at Spreadex, said: “Seemingly taking heart from the Bank of England’s claim that there has been ‘some improvement in the preparedness of the UK economy for no-deal Brexit’, the pound rebounded.”

Fiona Cincotta, senior market analyst at City Index, said: “After spending the morning in positive territory, the FTSE weighed down into the red, struggling under the stronger pound.

“The pound capitalised on the weakness of both the euro and the US dollar, extending gains versus its peers.

“Clearly the case of ‘best of a bad bunch’.”

The Dow Jones opened higher, moving above 27,000 points for the first time ever before sentiment cooled slightly.

The European markets slipped as optimism from Wednesday, when the Federal Reserve suggested lower rates could on the cards, fizzled away.

In stocks, household goods giant Reckitt Benckiser saw shares rise after it agreed with US authorities to pay more than £1 billion to resolve an investigation into a former subsidiary’s opioid addiction drug.

The company will pay up to 1.4 billion US dollars (£1.1 billion) as part of an agreement with the US Department of Justice and the Federal Trade Commission to resolve a long-running investigation into how its former subsidiary Indivior marketed the drug Suboxone.

Indivior itself also had a very positive day, as its shares surged higher after it upped its revenue and profit guidance for the year.

Land Securities shares fell by 5p to 832.8p at the end of trading on Thursday.

Furniture retailer DFS saw shares rise after it affirmed its profit outlook, although it also warned of a weaker backdrop due to Brexit uncertainty.

The price of oil was significantly calmer after Wednesday’s surge in value, moving up just marginally as political tensions relating to Iran continue to play on traders’ minds.