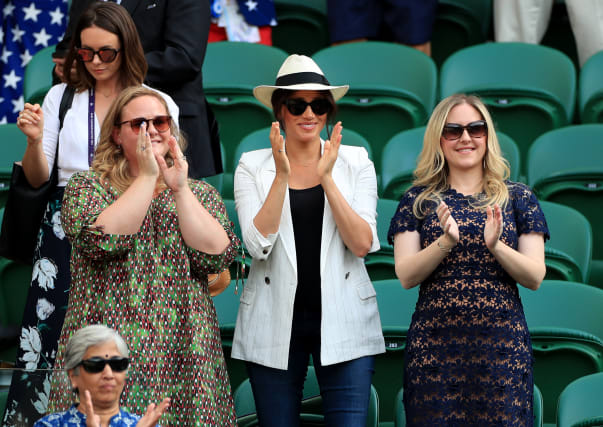 A Wimbledon fan has described how she was told by the Duchess of Sussex’s protection officer not to take photos of Meghan because she was at the tournament in a “private capacity”.

Sally Jones, a media consultant, told The Daily Telegraph that she was seated in the same row as Meghan in Court One last week.

Ms Jones, who said she was actually taking pictures of Serena Williams and had not noticed the duchess, said that the protection officer told her: “Would you not take photographs of the duchess. She’s here in a private capacity.”

Images of Meghan watching the tennis with friends last Thursday show another Wimbledon fan standing up in front of the former actress and taking a photo of her on his camera phone, before being spoken to by a man believed to be a royal bodyguard.

Meghan is also pictured greeting a young spectator in the stands during her visit.

Ms Jones described her experience as “another example of silly control freakery”.

She said the bodyguard appeared “quite embarrassed” and she reminded him that the event was televised.

Meghan and the Duke of Sussex’s approach to privacy hit the headlines after they decided not to reveal details of their son Archie’s godparents following his private christening at the weekend.

Graham Smith, from Republic, which campaigns for an elected head of state, said: “The police have no business telling people what photos they can take.

“When public figures are in public people will take photos, that’s life.

“Their recent behaviour suggests they want all the privilege and public money but can’t even tolerate the public more than they have to.”