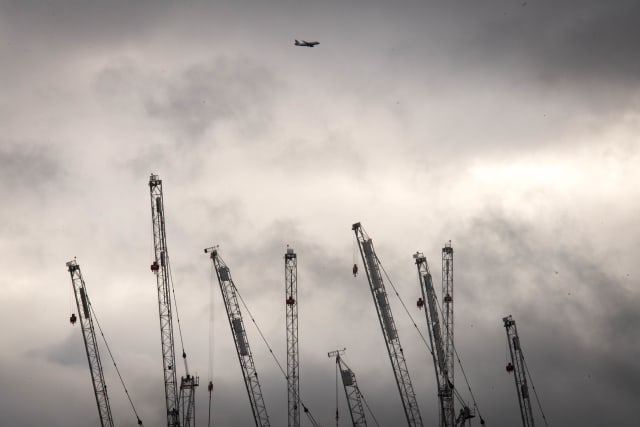 Bad news battered the pound on Tuesday as Britain’s construction sector suffered its worst monthly slump for 10 years, but London’s top shares rose on the back of weaker sterling.

The Bank of England governor said the central bank expects economic growth in the second half of the year to be considerably weaker.

“The very poor construction PMI comes on the back of a disappointing manufacturing showing from the day before, when the sector’ PMI printed 48.0 compared to 49.4 expected and last,” he said.

“If the services PMI also misses the mark tomorrow, then it will be a hat-trick of own goals for the UK economy.”

The blue-chip index was supported by the pound’s weakness, helping it to outperform its European peers.

Oil prices slumped, despite a decision by oil-producing countries to extend their production cuts.

“The US and China made a small bit of headway in trade talks in Japan, but the recent poor manufacturing figures from China and Europe have reignited concerns about the health of the global economy.”

In company news, PA revealed that one of Mike Ashley’s chief lieutenants had quit Sports Direct after 28 years.

Karen Byers, whom the billionaire called the person who “runs Sports Direct”, was described by insiders as the “glue that holds it all together”.

Shares in the firm were trading 6.8p lower at 272p by the close.

Five of the UK’s biggest gambling companies committed to a series of measures to address problem gambling, including a major increase in funding for addiction, following government pressure.

The group included three London-listed firms: William Hill, which finished the day 0.15p lower at 156.7p, Ladbrokes owner GVC, which dropped 3.8p to 665.8p, and Paddy Power owner Flutter Entertainment, which was down 38p to 6,134p.

Rail app business Trainline reported a 20% jump in sales for the past three months in its first trading update since floating on the stock market last month.

Johnson Service Group saw shares jump higher after the workwear and protective clothing supplier said it is on track to beat market expectations for 2019.