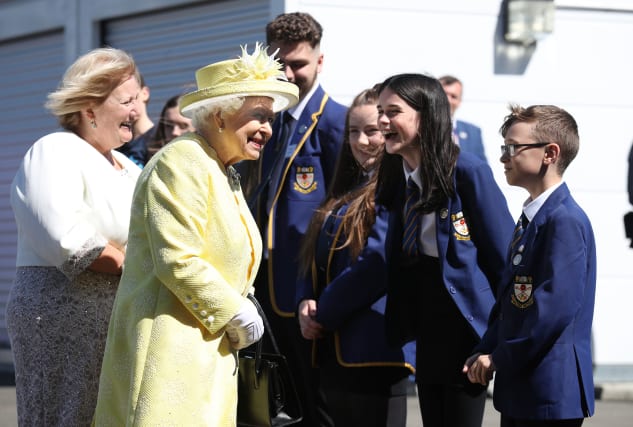 The Queen has received a Gaelic welcoming as she arrived at a school to present awards to pupils.

Saltire and Union Jack flags were waved as she arrived in warm sunshine at Greenfaulds High School in Cumbernauld, North Lanarkshire, on Friday.

Pupils Hannah Russell, 14, and Breagha Miller, 15, greeted the Queen in Gaelic and then translated the message as she entered the building.

Hannah, of Airdrie, said: “I was nervous but it was an honour.

“Gaelic is really important to us, so to speak it to the Queen is a big honour.

“She made us feel really comfortable.”

Breagha, also from Airdrie, added: “She was really nice. I was really nervous but fine when she came in.”

The Queen, wearing a yellow and white dress and coat by Angela Kelly which were embroidered with Swarovski crystals, as well as a matching hat, then went outside to the athletics track to listen to a performance by North Lanarkshire Schools’ Pipe Band.

Pupils cheered and waved flags when she returned inside the building to listen to music and readings in the auditorium.

The Queen then presented North Lanarkshire Council school recognition awards to pupils Fraser O’Brien and Zoe Train, as well as teacher Eileen McLoughlin – who was working her last day at the institution.

Both students had earned Gold Duke of Edinburgh awards.

To cheers and applause, she then unveiled a plaque in the auditorium to mark her visit.

Condorrat primary one pupil Archie Wilson presented the Queen with a posy of flowers, alongside teenagers Elise McCormick and Cameron MacIndoe.

Elise, 16, from Cumbernauld, said: “It’s an honour, it’s something I never imagined happening to me.

“It’s something I will remember for the rest of my life.

“She just spoke to me about my education and how it must be such a great place to learn in Greenfaulds.”

The Queen left the building while the South Lanarkshire Big Band played, and she waved to members of the public who were cheering and waving flags.

Greenfaulds High School is the centre for Gaelic medium education in the council area and currently has around 90 pupils studying the language.