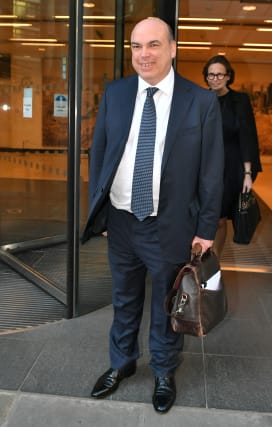 A British entrepreneur at the centre of a multibillion-dollar High Court fraud claim has accused American technology giant Hewlett-Packard of “making a series of far-fetched allegations of fraud and scapegoating”.

Autonomy founder Mike Lynch said Hewlett-Packard (HP) had “destroyed one of the most successful and promising software companies of its time due to management incompetence, politics and infighting”.

Mr Lynch made the claim on Wednesday at the start of his five-week-long cross-examination in what is believed to be the UK’s biggest civil fraud trial.

HP is suing Mr Lynch and Autonomy’s former chief financial officer (CFO) Sushovan Hussain for around five billion dollars (£3.8 billion) over its purchase of the Cambridge-based firm for 11.1 billion dollars (£8.4 billion) in 2011.

The technology giant claims Mr Lynch “committed a deliberate fraud over a sustained period of time” to artificially inflate Autonomy’s value, which it says forced it to announce an 8.8 billion dollar (£6.7 billion) writedown of the firm’s worth just over a year after its acquisition.

But the 54-year-old, from Suffolk, argues that HP is trying to make him “a scapegoat for their failures”.

In a 290-page witness statement, Mr Lynch accused HP’s new management of attempting to “shift the blame for its own incompetence” onto Autonomy’s former management, and those at HP who were behind the acquisition.

Mr Lynch stated: “The reality is not that Mr Hussain and I were desperate to sell an underperforming company; it is that HP mismanaged the Autonomy acquisition and it is laying the blame for its own failure on Autonomy, its management and the previous management of HP.”

He said HP’s due diligence of Autonomy was “rushed and disorganised” and suggested the company “cut corners” to be able to announce the acquisition at the same time as releasing its latest quarterly results, which he said were “very poor”.

Mr Lynch has also brought a counter-claim against HP for “a series of false, misleading and unfair public statements” about his alleged responsibility for supposed accounting irregularities and misrepresentations at Autonomy.

He said HP’s statements had caused him “substantial reputational damage” which in turn “caused me a substantial setback in my pursuit of business opportunities available to me following my departure from Autonomy”.

In cross-examination, HP’s barrister Laurence Rabinowitz QC asked Mr Lynch if Autonomy’s former CFO Hussain would have ever engaged in improper conduct behind his back.

Mr Lynch replied that he did not think Hussain would have done so “in front of my back or behind my back”.

He added: “I don’t believe Mr Hussain would have done anything improper.”

Hussain was convicted last April in the US of wire fraud and other crimes related to Autonomy’s sale and was sentenced to five years imprisonment in May, but he is expected to appeal.

Mr Lynch himself faces 17 charges of securities fraud, wire fraud and conspiracy in a federal court over the sale of Autonomy and, if found guilty, could face up to 25 years in jail.

Asked by Mr Rabinowitz, Mr Lynch stated that he had paid Hussain’s legal fees for the criminal proceedings in the US, adding that he had also provided money for his defence in these proceedings.

Mr Lynch is due to give evidence until the end of July.

The hearing before Mr Justice Hildyard, which is due to finish in December at the earliest, continues.