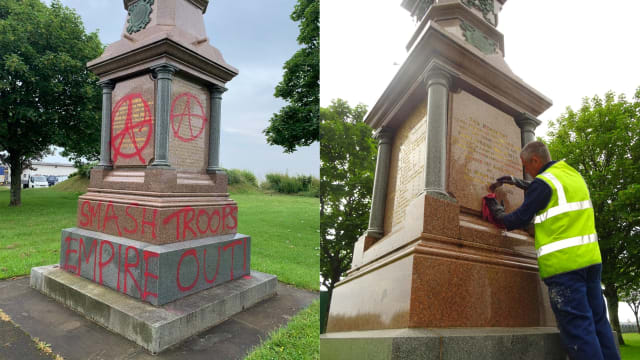 A war memorial in Swansea has been vandalised with red paint depicting anarchy symbols and slogans.

The memorial on Swansea’s seafront, which recognises deaths during the Boer War from 1900 to 1902, was painted with the words “smash empire” and “troops out”.

Mark Evans, active young people officer for Swansea Council, posted photos to Twitter of the vandalism, which appeared on Monday night and has now been cleaned by the local authority.

He said: “Some sad people out there. Graffiti at the WW1 memorial on the prom this morning.”

Mr Evans told the Press Association: “I noticed it while running this morning, and tweeted it to Swansea Council.

“On the way back there was a council worker cleaning it up.

“(There’s) still red paint on the lettering as they believe it to be gold leaf and the cleaning process may remove the leaf.”

A Swansea Council spokesman said: “Our graffiti removal team has already been out to clean it up and we have reported the incident to South Wales Police. We love our city and want everyone to respect it.”

In a statement, a spokesman for South Wales Police said: “We are aware of this incident and the Swansea city neighbourhood police team will attend today and liaise with the council.”