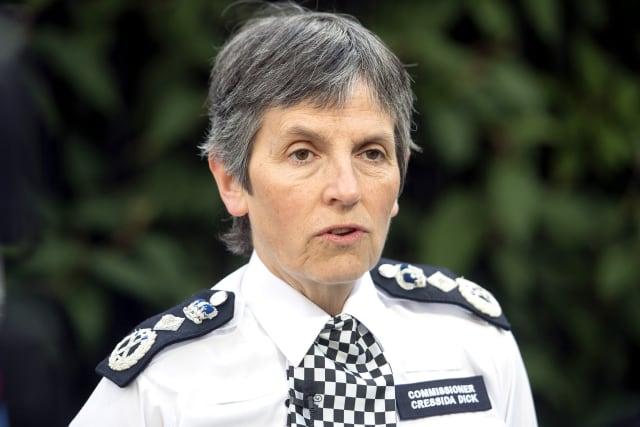 Britain’s most senior police officer has said she personally looked at drug admissions made by the contenders for the Conservative Party leadership but there would not be enough evidence to bring charges.

Metropolitan Police Commissioner Cressida Dick told radio station LBC such action would not be in the public interest and the events took place too long ago for there to be sufficient evidence.

Michael Gove admitted that he took cocaine on a number of occasions more than 20 years ago, while Boris Johnson said he thought he had been offered it once, but he sneezed so that it did not go up his nose.

Rory Stewart said he had smoked opium in Iran 15 years ago, while Jeremy Hunt said he drank a cannabis lassi while backpacking in India.

Ms Dick said: “We have had a very quick look at all the things that have been in the public domain.

“You have to satisfy two things. Firstly is there evidence and secondly, the CPS would have to decide would it be in the public interest to take any action.

“Of course with things being so historic, it’s almost certainly not in the public interest but actually in the cases that we have read about, and I’m not talking about any of them specifically, but in all those cases there is no sign that there would be sufficient evidence.”

She said she had personally looked at the information available and considered it on the basis of law and advice given in previous cases by the Crown Prosecution Service.

“I looked at it myself,” Ms Dick told host Nick Ferrari.

“I just said to my team, somebody’s going to ask me the exact question. I think I know the answer but let’s just double check.

“The answer is on the basis of what we know, on what we’ve seen, there is no sign whatsoever that there would be sufficient evidence to take somebody to court, so we won’t be doing any investigating.”

The Metropolitan Police chief said she would not be making any similar confession as “I have never, ever taken any drugs at all”.

Turning to an incident where a neighbour of Mr Johnson’s called police over a row between the politician and his girlfriend, the senior officer said she had “no view” on whether people should make recordings of their neighbours in such circumstances.

“I think it is important that people call the police when they’re worried about somebody, of course. That’s as far as it goes,” she said.

“I’m a police officer and we ask people to tell us if they’re worried about somebody.

“It can be helpful for us if there is evidence of a crime, of course, that we’re then going to be investigating, if somebody has made some sort of recording that can be very helpful.”

But she said in an instance where both parties were fine and no crime had been committed, the force would not have released the recording to the media.

The recording of the row between Mr Johnson and Carrie Symonds was passed to the Guardian newspaper.

“In an incident where we have been called because somebody is worried about somebody else, and when we get there both parties are fine and there are no offences, we would not put that into the public domain.”