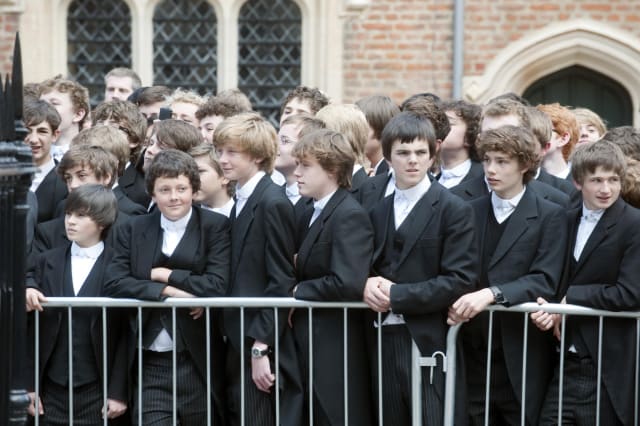 Britain’s most influential people are five times more likely to have studied at a private school than the general population, new research suggests.

Only 7% of Brits are privately educated, compared to 39% of those in top positions, according to data from the Sutton Trust.

It says the report, published with the Social Mobility Commission, reveals a pipeline from fee-paying schools through Oxbridge and into top jobs.

The research, released as Old Etonian Boris Johnson and former Charterhouse head boy Jeremy Hunt vie to be the next prime minister, looked at the educational backgrounds of more than 5,000 of the country’s leading people in 37 categories across nine broad areas.

These were politics, business, the media, Whitehall and public bodies, public servants, local government, the creative industries, women and sport.

Published on Tuesday, the report – Elitist Britain 2019 – found women are under-represented in all of the areas surveyed.

But for those who do make it to the top, their education journeys look different to men.

At the time of the analysis in spring 2019, almost two fifths (39%) of the Cabinet was privately educated.

For the shadow cabinet, it was just 9%.

Across the 37 categories looked at, only among men and women footballers were the privately educated under-represented.

The research finds that power rests with a narrow section of the population – the 7% who attend private schools and the 1% who graduate from Oxford and Cambridge.

It also found that across various public bodies there is a majority of private school alumni.

They make up 65% of senior judges, 59% of civil servant permanent secretaries, 57% of the House of Lords, and 52% of Foreign and Commonwealth Office diplomats.

The report found big differences in the educational backgrounds of men and women at the top of sporting life.

Just 5% of men’s football international players attended independent schools, in stark contrast to the 37% of rugby internationals and 43% of the England cricket team.

Women’s teams showed similar patterns to their male counterparts in terms of school background, but around 80% of female internationals across football, cricket and rugby attended university, compared to a very small number of men.

Among the wealthiest members of the TV, film and music industries, there are substantial numbers of independent school attendees, at 38%, the research suggests.

The Sutton Trust and the Social Mobility Commission make a number of recommendations in the report to ensure the talents of people from all backgrounds are made use of.

These include tackling financial barriers to specific industries and professions, especially by paying internships of significant length, and adopting contextual recruitment and admissions practices.

“Divided by politics, by class, by geography. Social mobility, the potential for those to achieve success regardless of their background, remains low. “

“The key to improving social mobility at the top is to tackle financial barriers, adopt contextual recruitment and admissions practices and tackle social segregation in schools.

“In addition, we should open up independent day schools to all pupils based on merit not money as demonstrated by our successful Open Access scheme.”

The researchers looked at past school and university attendance for around 5,000 individuals.

In some cases information was provided confidentially by the individual.

School category was defined as where the individual spent most of their secondary school years, and university where they completed their first undergraduate degree.

Dr Luke Heselwood, from think tank Reform, said: “These scandalous figures show that the UK is far from being a meritocracy.

“Fixing this will require serious reform to the education system as, despite improvements, the most advantaged are nearly 10 times more likely to attend elite universities than the most disadvantaged.

“If candidates vying to become prime minister are serious about giving equal opportunity to all, they must focus on raising the attainment of disadvantaged school pupils so they can apply to elite universities.”

Shadow education secretary, Angela Rayner, said: “For too long our top professions have been a closed club, dominated by a wealthy and privileged elite who attended the same private schools.

“The old boys’ network and the old school tie still hold back talented and hard-working people from less privileged backgrounds.”

A Department for Education spokeswoman said: “For too long professions like law, politics and journalism have been dominated by independently schooled people. By making sure that our state schools offer a comparable education to private schools we will drive down these inequalities.

“The gap between state funded schools and independent schools has never been smaller. 85% of state funded schools are now rated good or outstanding – compared to 68% in 2010 and academies across the country like Brampton Manor in East London are rivalling the results of prestigious private schools.”