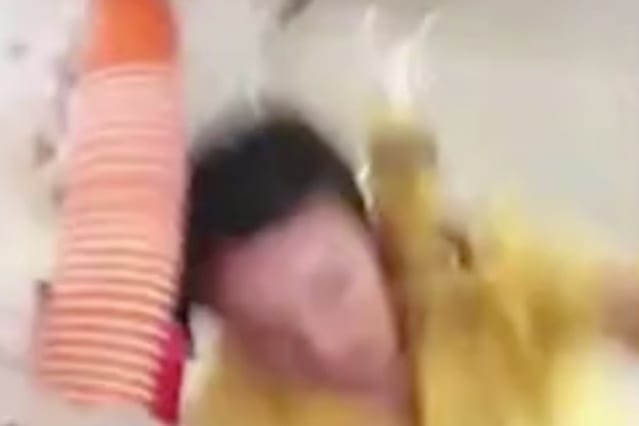 Footage captured aboard an ALK Airlines flight traveling from Kosovo to Switzerland depicts the moment severe turbulence sent a stewardess and bar cart flying upward into the ceiling of the aircraft before crashing down on those seated below.

Passenger Mirjeta Basha, who shot the terrifying cellphone video while traveling from the city of Pristina to Basel with her husband on June 16, told German newspaper Badische Zeitung she was convinced the plane was going to crash.

"I thought we were all going to die," she recalled.

In Basha's short clip, a flight attendant with the Bulgarian airline can be seen walking the Boeing 737's aisle with a beverage cart when the plane begins to shake. Suddenly, the vessel is rocked by a violent spell of turbulence, which sends the stewardess and cart slamming into the aircraft's ceiling.

Cups and liquids fly around the chaotic area before both the cart and airline employee come crashing down on passengers below, leaving some injured and even scalded by hot water. A woman in Basha's row then folds her hands and begins praying in the aftermath of the turbulence.

Ten people, including Basha's husband, were reportedly taken to Basel Hospital for treatment upon landing.

Still, Basha lauded ALK staff, saying they remained professional throughout the traumatic ordeal, telling passengers "we need not be afraid and everything will pass."

According to AeroInside, the incident occurred after pilots attempted to deviate around an "isolated active thunderstorm cell."

"The aircraft continued for a safe landing on Basel's runway 15 about 30 minutes later," the site added.