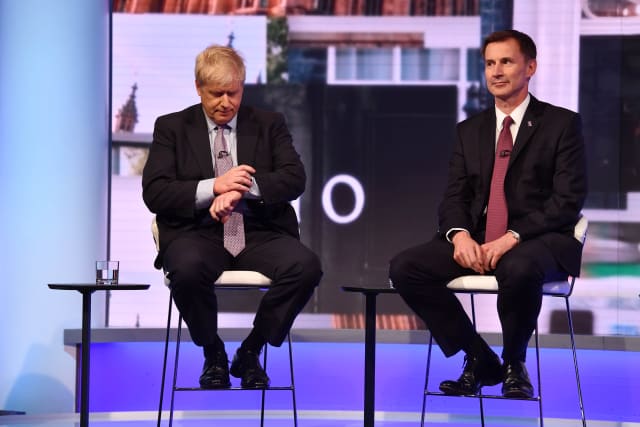 While the candidates for the Tory leadership debated issues and answered questions on television, social media reacted.

But what caught the eye of those who took to Twitter during the BBC debate? Here are five things people discussed online.

– 1. Why did Rory Stewart remove his tie?

Rory Stewart came through the second ballot for the Tory leadership with 37 votes, but attracted attention for another reason once the debate began.

Viewers noticed Mr Stewart had removed his tie early on in the discussion, leaving plenty baffled as to his motive.

“Why did @RoryStewartUK take off his tie mid-way through debate?” broadcaster Robert Peston tweeted.

The tie remained absent for the remainder of the broadcast, but Stewart’s positioning on his chair also drew comment.

The 46-year-old appeared to be the only candidate with his feet on the ground, sitting on the edge of his seat while the others balanced their feet on their stools.

Erin, 15, from Glasgow asked the candidates whether they would commit to net-zero carbon emissions by 2025, but was not satisfied with the answers she received on the subject.

“Erin, who’s impressed you the most?” Emily Maitlis asked.

“Well to be honest, none of you have really impressed me in the way that I’m looking for,” Erin replied.

“Climate change isn’t an issue of tomorrow, it’s an issue of today, and we need to take drastic, critical action and I don’t think any of you are willing to offer that.”

Comedian Kathy Burke tweeted: “Erin. The most intelligent person on there,” while Labour MP Jess Phillips responded to Erin’s concerns by tweeting: “This is going to take a huge amount of change and we should stop faffing.”

The format of the debate saw a question asked by a member of the public, which Maitlis then repeated to the candidates, but the ensuing discussion left a lot to be desired.

With candidates talking over one another as well as their host, those on social media were quick to criticise the results.

“Can we make sure that #BBCOurNextPM is never shown to anyone overseas, ever. Can we lock the tapes away. Can we just keep it to ourselves,” Ben Fogle tweeted.

While the candidates squabbled at times, Maitlis appeared to bear the brunt of the criticism online.

Some said the chair had lost control of the debate, while the host was also criticised for apparently talking over the candidates during discussion.

However, others felt it was the candidates who were to blame for ignoring Maitlis’s questions and comments.

“The guys on the #BBCOurNextPM debate are basically just ignoring the only woman present – @maitlis – it is NOT a good look!” tweeted Channel 4 news presenter Cathy Newman.

If one moment were to sum up social media’s reaction to the discussion, it would be the eye-roll offered by Carmella, who had asked why a no-deal Brexit was being contemplated.

While the candidates spoke over one another in the studio, Carmella rolled her eyes from the screen in front of them.

“Carmella’s savage eye-roll is all of us right now,” tweeted one, while Ms Phillips simply tweeted: “Carmella for PM”.

The third ballot will go ahead on Wednesday, where Boris Johnson remains the favourite to become the next leader of the Conservative Party.