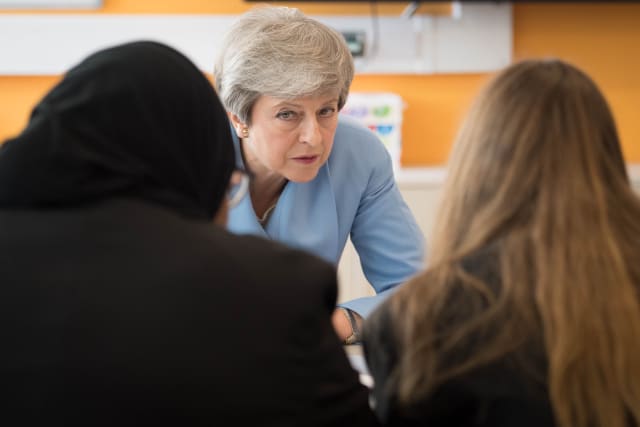 Theresa May’s efforts to improve the chances for vulnerable youngsters are being hampered by “paralysis” in Westminster and the focus on Brexit, the Children’s Commissioner for England warned.

The Prime Minister set out plans for new teachers to receive training on how to spot the signs of mental health problems in youngsters, under a plan to overhaul society’s approach to the issue.

A wide-ranging package pledges to ensure people have the skills they need to identify mental health issues before they become critical, particularly in young people.

But children’s commissioner Anne Longfield was scathing about the Government’s failure to improve the “wretched” futures faced by vulnerable youngsters and dismissed the Prime Minister’s announcement as a “twiddle to teacher training”.

She said she did not think teachers would have “that much trouble” spotting mental health conditions, but “they have trouble finding anyone to treat them”, arguing that specialist help should be available in every school.

“Now, on the day we hear that teenagers in Liverpool are being paid £1,000 to stab other kids, and the Government publicly recognises that one in ten kids with a social worker lurches in and out of the service for four to five years, the PM calls for a twiddle to teacher training?

“It is three years since Brexit became the national political priority – three years in which half of the youngest children in need have grown up failing to meet their early development goals, a lifetime disadvantage.

“While the Westminster manoeuvring continues, on and on interminably, Government itself has ground almost to a halt and the prospects for many of these kids remains wretched.”

The package of measures to improve mental health was announced by Mrs May as part of a series of policies she hopes will be the legacy of her time in office.

Speaking at a school in south-west London, she said: “I’m setting out today one of the crucial issues that I think it is important for the next prime minister to take forward.

“This is not about Brexit, it is about the future of our young people.”

She added: “There is more to be done because for too long there has been a stigma attached to mental health and we haven’t seen it taken as seriously as physical health, and that is what needs to happen.

“When I first came into Number 10 I stood at the doorstep of Number 10 Downing Street when I became Prime Minister and I pledged that mental health was one of the issues that we would focus on.”

Mrs May’s plan was  welcomed by charities but they also warned of the difficulties facing young people already struggling with poor mental health.

Labour claimed that mental health services are stretched “to their breaking point” and sufferers are not receiving the aid they need.

“Training for teachers and other professionals is welcome but when we know thousands of children and young people are either turned away from mental health services or have to wait too long for treatment, it’s clear that she’s missing the real issue,” said Barbara Keeley, shadow minister for mental health and social care.

But Almudena Lara, head of policy at NSPCC, said mental illness prevention services are “vital” yet high-quality treatment must also be readily available for those who need it.

Their research found some 150 children a day are rejected by Child and Adolescent Mental Health Services (CAMHS), she added, with many spending months on waiting lists.

Investment in mental health services will rise to at least £2.3 billion a year by 2023/24 under the NHS Long-Term Plan, which the Prime Minister launched earlier this year.

The measures announced as part of the package include:

– Guidance for school mental health leads so they can help children struggling with self-harm and risk of suicide.

– Access to world-class teaching and training materials for all teachers to use in classrooms.

– Updated professional standards for social workers across England to increase their knowledge and skills.

– £1 million to the Office for Students for a competition to find innovative new ways to support mental health at universities and colleges.

– Research following the Government’s Children in Need review to find the best ways to support children who have faced adversity, abuse and neglect.

– Greater transparency in how money is spent on mental health services, with a commitment to independent audits to ensure that the funding committed under the NHS Long-Term Plan reaches the front line.

– Support given to new parents from health visitors and other professionals to be modernised to better support their babies’ behavioural and emotional development.

A “breathing space” scheme will provide respite from debt collection for those seeking mental health support and there is a commitment to overhauling the Mental Health Act.

This legislation will include banning the use of police cells as a place to detain people experiencing mental illness, Downing Street said.