Amanda Knox has hit back at Piers Morgan after he accused her of disrespecting Meredith Kercher's family with their "self-pitying" tour.

Knox - who in 2015 was acquitted of the murder of her roommate Kercher - has made a tearful return to Italy to speak on the subject of wrongful convictions at the Criminal Justice Festival in Modena.

Good Morning Britain host Morgan tweeted a picture of Knox at the event and wrote: "Out of respect for Meredith Kercher's poor family, Amanda Knox should stop her self-pitying 'all about me' victim tour - and shut up."

The American was acquitted over the killing of the British student in 2011.

Amanda Knox, right, and her boyfriend, centre, talk with a guest at the opening of a conference on wrongful convictions in Modena on Thursday. Photograph: Antonio calanni/AP

Amanda Knox’s return to Italy has been described as “inappropriate” and “very painful” by a lawyer for the family of the murdered British student Meredith Kercher.

Knox was twice convicted and twice acquitted of killing Kercher, 21, in the home they shared in the university town of Perugia in November 2007. The body of Kercher, a student from Coulsdon, Surrey, who was in Italy on an Erasmus programme, was found under a duvet in her bedroom, partly undressed with multiple stab wounds. She had also been sexually assaulted.

Knox has returned to Italy for the first time since being released from prison in 2011, to participate in a conference about wrongful convictions in Modena.

Knox will take part in a debate on the subject of “trial by media” on Saturday. She published an essay on Medium on Wednesday in which she wrote about the “ravenous media” that for years profited “by sensationalising an already sensational and utterly unjustified story”.

She explained why she chose to make her social media accounts public. “The tabloids would lift my photos out of context and call me strange,” she wrote. “I did so because I just wanted to have what every other person around me had, the freedom to shout into the wind and say: ‘Here I am!’”

One of the images that attracted attention was of Knox dressed as Little Red Riding Hood in Germany’s Black Forest in 2017, showing her looking petrified as a man dressed as the Big Bad Wolf stands behind her.

Before leaving her home in Seattle for Italy, she posted a photo on Instagram of her clinging to a mountain edge alongside the caption: “3 Days till I return to Italy for the first time since leaving prison. Feeling frayed, so I made my own inspirational workplace poster. ‘Hang in there!’ Just imagine I’m a kitten.”

She also shared an image of herself with her fiance asking followers to wish the couple a “buon viaggio”.

The Kerchers’ lawyer, Francesco Maresca, said Knox’s reappearances in the public eye were very painful for the family. Knox has previously said she would like to meet the family, visit Kercher’s grave and return to Perugia.

“All these insistences and appearances are only ever done to keep the attention on herself,” Maresca told the Guardian. “The murder is a tragic memory for the Kercher family, they lost their daughter and sister in such a terrible way. It’s also an injustice for them as they still don’t know the full truth.”

He said Knox’s return and involvement in the conference was “inappropriate”, adding: “It’s unjustified because her process was not a classic case of ‘judicial error’. There was a swing in the decisions: some judges decided one way, and others in another way.”

The Kercher family rarely respond to the publicity generated by Knox, who reportedly earned about £3.5m for her memoir, took part in a Netflix documentary about the case in 2016 and has been the subject of other books and films.

On the 10th anniversary of Kercher’s murder, her older sister Stephanie shared a statement with the Guardian. In it she described her strong, determined and caring character, her infectious laughter and her love for Italy. She also wrote: “If nothing else, I can remain sure that the last time I saw her, when I touched her frozen cold body and lay a kiss on her cheek for the last time, the determination to live, the struggle and the fight that she put up on the evening of 1 November despite being outnumbered, was clear to see.”

Knox and her ex-boyfriend Raffaele Sollecito spent four years in prison after initially being convicted of the murder. For Knox, three of those years was for a defamation conviction received after she wrongly accused Patrick Lumumba, a bar owner, of the crime. Lumumba spent two weeks in jail and was only released after someone came forward with an alibi for him. Knox had told investigators that she “covered her ears as he [Lumumba] killed”. She later said she made the allegation as a result of police coercion.

Knox and Sollecito were acquitted in 2011 before being convicted again in 2014 by an appeals court in Florence, which ruled that the multiple injuries inflicted on Kercher’s body proved that Rudy Guede, an Ivorian man serving time for the murder, could not have acted alone. Italy’s highest court overturned the decision in a definitive ruling in 2015, because of what it described as “stunning flaws” in the investigation that led to the convictions.

Amanda Knox faces backlash over 'murder mystery' post
Amanda Knox faces backlash over 'murder mystery' post
(FILES) This file picture taken on March 12, 2011 shows US Amanda Knox takes place in court before the start of a session of her appeal trial in Perugia's courthouse. talian prosecutors on February 14, 2012 lodged an appeal against the acquittal of US student Amanda Knox, accusing her of murdering her British housemate Meredith Kercher in the university town of Perugia in 2007. AFP PHOTO/ FILES / TIZIANA FABI (Photo credit should read TIZIANA FABI/AFP/Getty Images)
US student Amanda Knox is seen in court on September 23, 2011 as her appeal trial against her conviction for the murder of British housemate Meredith Kercher is winding up, with prosecutors set to present their final arguments Today. Knox was sentenced to 26 years in prison in 2009 but has always protested her innocence, and the appeal hearing has cast serious doubts on the DNA evidence that helped convict her and her Italian boyfriend Raffaele Sollecito. AFP PHOTO/MARIO LAPORTA (Photo credit should read MARIO LAPORTA/AFP/Getty Images)
Italy – Rome press conference of Raffaele Sollecito after the innocence sentence of the accuse of the murder of Meredith Kerchner (Photo by camilla morandi/Corbis via Getty Images)
El Tribunal Europeo de Derechos Humanos (TEDH) ha condenado este jueves a
Europe's top human rights court has ordered Italy to pay €18,400 (£16,000) to Amanda Knox after ruling that she was denied adequate legal representation when she was questioned over the murder of British student Meredith Kercher over a decade ago.

Knox, 31, retorted: "Says the guy who's begged me to be on his show multiple times, and I've turned him down every time."

Says the guy who's begged me to be on his show multiple times, and I've turned him down every time. https://t.co/0yE52anFEH

Morgan then suggested Knox couldn't be trusted to tell the truth by bringing up her false claim that bar owner Patrick Lumumba was involved in Kercher's at the flat they shared in Perugia Italy. 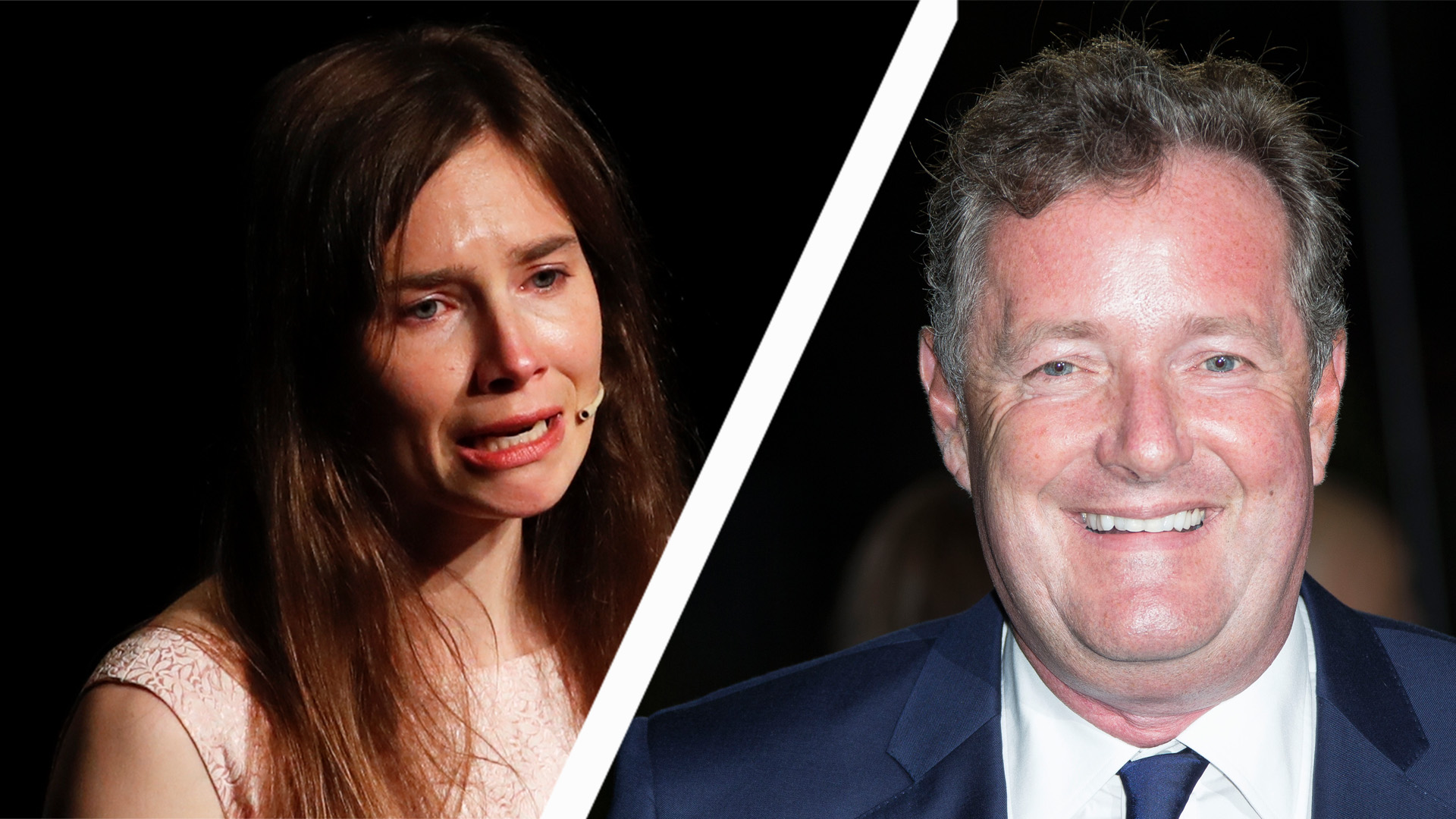 Lumumba spent two weeks in custody before a witness gave him an alibi and Knox later admitted she had made it up, resulting in three years being added to her jail sentence.

Morgan said: "I think we all know why you might wish to avoid interviews with British TV journalists, especially those like me who once worked with Meredith's father. Mine would start with this question: your lies sent an innocent man Patrick Lumumba to jail, so what else did you lie about?"

Kercher's family have called Knox's return to Italy for the first time since she was cleared "inappropriate".

Meredith Kercher was found dead in 2007 at the flat she shared with Knox. Knox and her then boyfriend Raffaele Sollecito pled not guilty but were convicted of the murder in the Italian courts in 2009.

Burglar Rudy Guede, 32, was convicted of Meredith's sexual assault and murder and is currently halfway through his 16-year sentence.