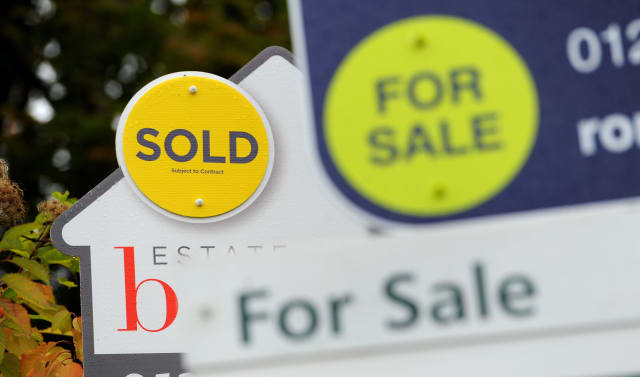 The average price tag on a home coming to market is less than £100 away from hitting a new record, despite political uncertainty, according to a property website.

The average asking price has increased by 0.3% or £1,058 compared with the previous month.

Miles Shipside, director of Rightmove, said: “With the country supposedly consumed by the twists and turns of Brexit, it’s surprising that the price of property coming to market is within a whisker of setting a new record.

“More buoyant markets in the North and Midlands are helping to nudge up prices due to the seemingly relentless strength of buyer demand.

“Buyers in four regions are seeing higher new seller asking prices on average than ever before.”

Rightmove said the supply of fresh properties coming on the market is down by around 5% this year so far compared with a year earlier, indicating some hesitancy among sellers.

Mr Shipside said: “However, these better-performing northerly regions are all beating that national average.

The national average number of sales being agreed in the first half of the year is down by only 4.3% on the same period last year.

But, again, the regions which have set new price records are seeing sales hold up more strongly than the average across Britain, Rightmove said.

Sales in Wales are 0.2% ahead of the same period a year earlier, those in Yorkshire and the Humber are down by 1.9%, sales in the North West have fallen by 3.3%, while sales in the East Midlands have seen a 3.7% decrease.

On average the number of sales agreed for the year to date in northern regions is down by 1.7% compared to the same period  last year, while sales in southern regions have fallen more sharply, by 7.1%.

Sellers in more difficult locations may need to undercut the asking prices of similar properties, and preferably have a well-finished home to make a sale, Rightmove said.

Mark Manning, director of Manning Stainton in Leeds, Harrogate, Wetherby and Wakefield said: “This is certainly not a market without its issues as the continuing political uncertainty remains a concern as we move towards the summer.

“However for now the market in the North seems poised for further growth over the coming months as the sheer weight of buyer demand continues to push prices ever higher across our region.

“Since the start of the year, just over a third of all the properties that we’ve listed have been sold for their asking price or higher and with an average selling price of just over 98% of the asking price it seems that sellers are still calling the shots.

“Much like in 2018 we have also seen a consistent rise in the number of first-time buyers looking to get on the ladder.”

Nick Leeming, chairman of Jackson-Stops, said: “Northern regions in particular are continuing to show resilience amid this political landscape, with many buyers and sellers in agreement that now is as good a time as any to make a move.

“With property prices reaching record highs in some northern parts of the country, we should start to see an increase in listings and subsequent transactions as those southern sellers currently sitting on the fence decide to launch their home to the market in fear of missing out on a good deal.”