We are not safe in this country, says father as daughter’s attackers sentenced 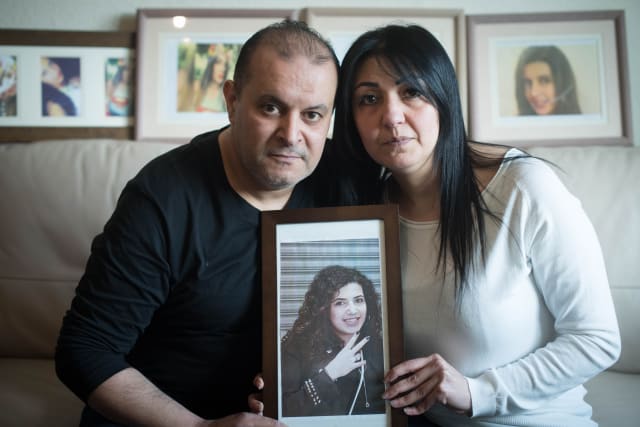 The father of an Egyptian student who was repeatedly punched and slammed against a bus stop by a gang of girls has condemned their sentences and said “we are not safe in this country”.

Mariam Moustafa suffered a stroke which left her in a coma after the attack “over a boy” on February 20 last year, and died almost a month later on March 14.

Two members of the group were spared jail at Nottingham Crown Court, despite taking part in an affray during which the frightened 18-year-old was attacked.

Mariah Fraser, 20, Britania Hunter, 18, and a 16-year-old girl, who cannot be named, were part of a “pack” of girls who confronted the victim in a violent episode “fuelled by social media”.

Fraser was ordered to spend just eight months in a young offenders’ institution for her part in the attack, despite having a catalogue of previous convictions, including robbery, attempted robbery and assaulting a police officer.

Although the judge branded the two other defendants “aggressive” and “cowardly”, he decided not to send them to youth custody, saying: “The family of Mariam want the maximum possible sentence to be imposed on all those involved in the case.

“Sympathy for their desperate sadness cannot displace a proper, dispassionate approach to sentencing in a court of law.”

After the hearing, Mariam’s father Mohamed Moustafa said he feels his family are no longer safe in the UK and is considering moving back to Egypt.

The 51-year-old said: “I have said that from the first day, we need justice. Not just for me but for other people.

“Maybe this will happen to your daughter or your son in future – we don’t have a strong law for what happened.

He added: “We are not safe in this country.”

Hunter was given a 12-month community order and told to carry out 40 hours’ unpaid work, and the 16-year-old girl was remitted back to youth court with a view to a referral order.

Mariam was attacked near a bus stop in Parliament Street, Nottingham, at 8pm while her friend Pablo Jawara tried to protect her.

Six girls were charged after the incident, including three other teenagers aged 18, 17 and 16, who will be sentenced later this month.

The court heard how two of the six, the 16-year-old and an 18-year-old who will be sentenced later this month, were the main aggressors in the altercation, while the others were either filming the incident or laughing while watching events unfold.

Passing sentence, Gregory Dickinson QC told the three: “It is important that everyone with an interest in this sad case should understand that the three defendants are to be dealt with for the offence of affray committed on February 20 2018.

“They were not charged with murder or manslaughter. They are to be sentenced on the basis that their actions, individually and collectively, did not cause the death of Mariam Moustafa.

“Mariam’s last experience of her precious young life was facing this violence and abuse. That was wretched for her, and an awful memory for her family, which will haunt them forever.”

The judge continued: “This was a confrontation. Shouting, abuse, threats and finally violence. All in one direction.

“There is a natural, strong suspicion that the stroke was brought on by the actions of the defendants.

“The conclusion was that it could not be proved that there was a causative link between the actions of the defendants and the stroke.”

Despite four pathologists confirming that the attackers could only be charged with affray, Mr Moustafa said the law does not protect his family.

He said: “I have been doing my best for all of my family – telling them to keep safe, don’t do anything wrong in this country, don’t attack anyone, but after court today… nobody can protect my family.

“When somebody told me there was no link between what happened and me losing my daughter, I did not believe them at all.

“Everything that has happened in this case has just been wrong.”

The remaining defendants will be sentenced at Nottingham Youth Court on June 19 alongside the 16-year-old girl.