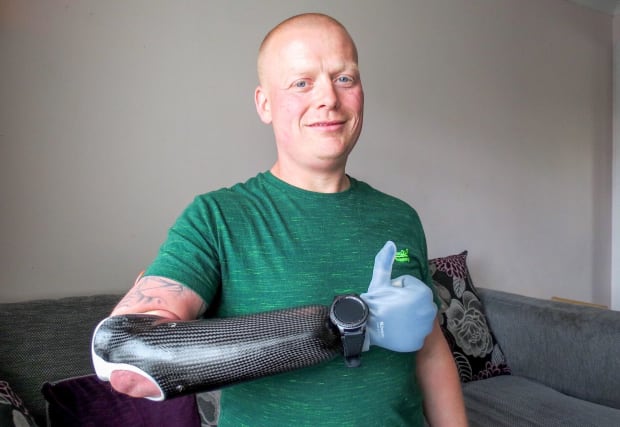 A firefighter whose hand was amputated after being injured has received £1.5 million in compensation.

Ian McDonald was taken to hospital in March 2014 with a painful and swollen hand, two hours after a training exercise at Bishopbriggs Fire Station.

Faulty cutting gear caused a fine jet of hydraulic fluid to pierce his leather safety gloves, forcing him to undergo what would be the first of three amputations.

Despite a change in painkillers and attempts at acupuncture and botox, he was admitted to the Queen Elizabeth University Hospital last June and had his right hand amputated at the wrist, after 18 days and six surgeries.

Speaking about the incident itself, Mr McDonald, 37, said: “I had no idea what was going on – my hand felt like it was on fire and was swollen with a painful throbbing feeling.

“When hospital staff examined me they saw a tiny red dot like a skelf (splinter) which turned out to be a puncture wound.

“Then, when blood tests revealed I was poisoned, we realised something happened with the cutting gear.

“My dexterity remained pretty good but the pain was agonising and nothing would stop it.

“When I heard the full hand had to go, the idea of being pain-free made it easier to accept.”

The father-of-four first became a firefighter in 2004 at Castlemilk Fire Station and was part of the response teams to the Stockline Plastics disaster – in his first week – and 2007’s Glasgow Airport attack.

Mr McDonald, from Bishopbriggs, welcomed pastoral care from the Fire Brigades Union but chose his own lawyers to access a specialist prosthetic instead of a “hook” offered by the NHS.

Mr McDonald added: “I understand the NHS can’t afford fancy prosthetics but the hook has limited uses while my new arm restores more normality to my life.

“I can hold mugs, phones, change my daughter’s nappy, and after adapting my steering wheel the DVLA confirmed I could still drive.

“I’ve still a way to go but after the support of my family, the doctors and colleagues I finally feel like the dark days are behind me.”

Mr McDonald is now recovering at home with his wife Claire, 33, their daughters Ava, 11, and Thea, eight months, and sons Lucas, seven, and Noah, three.

He said: “It was a case of ‘it’s the hand or your life’ so it was an easy trade.

“I was injured but it’s really Claire the accident happened to – she basically raises four kids, runs a household, manages her business and helps me.

“My recovery and our children’s smiles would be impossible without her.

“Claire is nothing short of incredible and I am lucky in ways I could never describe, but I hope she sees and knows.”

David Nellaney, partner at Digby Brown’s Glasgow office, added: “The Scottish Fire and Rescue Service (SFRS) is undoubtedly a safety-conscious organisation that provides an invaluable service, but on this occasion it failed in its duty of care to an employee.

“No settlement can alter the past, but it can improve the future and in Ian’s case it will provide access to ongoing medical treatment and ease the financial implications of this workplace injury.

“Additionally, I’d hope this case has resulted in SFRS personnel benefiting from improvements to the safety of their equipment and procedures.”

David McGown, SFRS deputy chief officer, said it was “extremely heartening to see that he continues to make a strong recovery”.

He added: “We are also pleased that we were able to work together to reach an agreement which ensures his access to medical treatment and quality of life improvements.

“Following a robust investigation into Mr McDonald’s injury, we undertook a review of equipment and related safety checks and have taken appropriate steps to minimise the risk of similar incidents happening in the future.

“This included the removal of all third-party hoses and replacement with original equipment manufacturer parts and we also undertook a review of the latest technologies available for future purchases and replacements, to minimise risk to staff.”