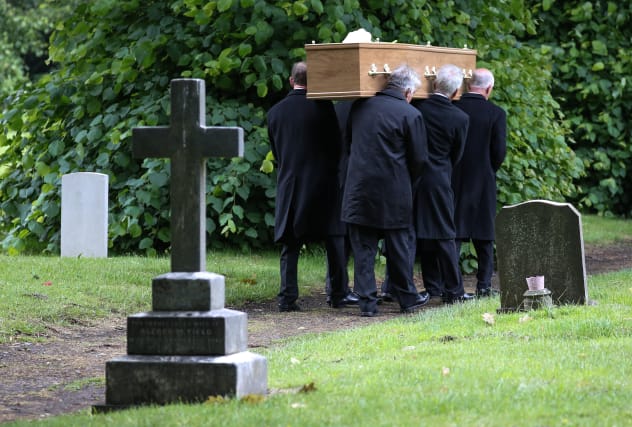 A low-key funeral has been held for a Jeremy Kyle Show guest who is believed to have committed suicide after failing a lie detector test during filming for the programme.

The short graveside service, led by Canon Bob White, vicar of St Mary’s Church in Portsmouth, was attended by three women, a man and a girl.

After paying their respects and laying single roses, the mourners comforted each other before leaving the cemetery arm in arm.

The funeral was paid for by Portsmouth City Council because Mr Dymond did not have any close family to pay for the service.

An inquest opened last month into Mr Dymond’s death heard that he was found in his room in Portsmouth on May 9 after splitting from fiancee Jane Callaghan, from Gosport.

Detective Sergeant Marcus Mills, of Hampshire Police, told the hearing that the death was a suspected suicide.

The Jeremy Kyle Show has since been axed and Mr Dymond’s death comes amid growing scrutiny of the duty of care that reality TV shows have towards participants.

The inquest heard that Mr Dymond told his landlady he had gone on The Jeremy Kyle Show for a lie detector test to show he had not been cheating on Ms Callaghan.

He had said he was worried about the repercussions of the show and the subsequent rumours.

The inquest is set to resume for a full hearing on November 21.