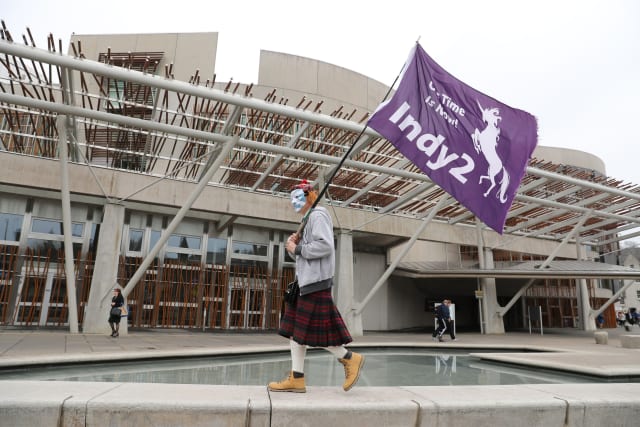 Almost three-fifths of Scots say it should be Holyrood ministers – and not Westminster – who decide if there should be a second independence referendum.

A poll for Progress Scotland – which was set up by former SNP depute leader Angus Robertson – found that 58% of those who expressed a preference believed that the matter of whether there was another vote should be for the Scottish Government to decide.

And while Theresa May has rebuffed any calls for a second referendum – with her successor likely to take the same stance – only 42% said the question of whether to hold such a vote is for the UK Government to determine.

Under the current system, Holyrood could not hold a legally binding independence referendum without a Section 30 order being granted by UK ministers.

As well as the 58% of Scots who said Holyrood ministers should have the final say on the matter, the same proportion also said the Edinburgh administration should be able to determine the timing of a possible second referendum.

Meanwhile, 62% of those who expressed an opinion said the Scottish Government should be able to determine the question asked in a referendum, with 38%  stating that this should be decided by UK ministers.

The poll was carried out by Survation with 1,022 people questioned as part of the research – which took place after Nicola Sturgeon’s Scottish Government published legislation which could pave the way for a second vote on independence.

The First Minster has already indicated that such a vote could take place in the second half of 2020.

Mark Diffley, independent polling adviser to Progress Scotland, said the research “shows that the significant majority of Scots believe that the Scottish Government should have the final say on the timing and content of a second independence referendum”.

He added: “Of those who have an opinion, nearly six in 10 Scots (58%) think the Scottish Government, rather than the UK Government, should have the final say in deciding whether indyref2 should take place and on its timing, while 62% think it should decide on the question that should be asked.

Mr Robertson, managing director of Progress Scotland, said: “Clearly there is a strong majority for Scotland’s future to be decided in Scotland and not by the UK Government.”

SNP depute leader Keith Brown said: “This new poll shows clearly that the public want an independence referendum to be made in Scotland, not in Westminster.

“People in Scotland deserve the opportunity to determine our future.

“It would be a democratic outrage for the Tories to try and stand in the way of democracy – and, as this poll shows, people in Scotland won’t stand for it.”