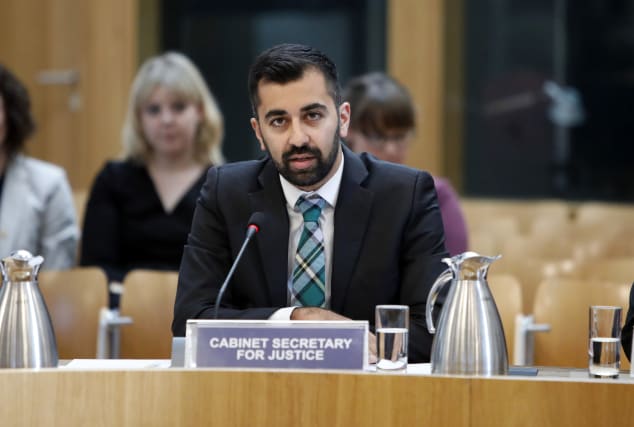 Judges, sheriffs and victims of crime have to have confidence in community-based punishments for the presumption against short prison sentences to work, the Justice Secretary has said.

Giving evidence on plans to restrict the use of short sentences, Humza Yousaf told MSPs on the Justice Committee – who later voted to support the proposals – that Scotland’s high imprisonment rate “is a real stain on our conscience”.

The Scottish Government wants to extend the presumption against jail sentences to those of less than 12 months rather than the existing recommendation of three months, and Mr Yousaf argued that the “evidence is unequivocal” for moving towards fewer short terms.

“When it comes to rehabilitation, there is absolutely no doubt that community sentences — addressing the root causes, the root problems, the reasons why people offend — are much more effective for rehabilitation than short custodial sentences,” he said.

Mr Yousaf warned that trying to reduce the number of people jailed for under 12 months “is not a silver bullet”, but suggested that short-term custodial sentences “disrupt all things that are most likely to reduce offending – family relationships, housing employment, access to healthcare and support”.

He added: “People released from short custodial sentences of 12 months or under are reconvicted almost twice as often as people who have received a community payback order.”

Justice Committee convener Margaret Mitchell told Mr Yousaf that, from the evidence they had heard from victim groups, communities “have no faith in community sentencing… because it takes too long for someone to be found in breach”.

The concern was echoed by Liam Kerr MSP, who said: “Victims will look at what’s going on and say, ‘In prison there’s punishment and an element of public protection’.

“Do you not recognise that they would have legitimate concerns that isn’t being mirrored on the alternative system?”

Mr Yousaf appeared to agree that, for the presumption policy to be properly implemented, there had to be greater confidence in the effectiveness and security of other options to prison.

Warning against “scaremongering about the alternatives”, Mr Yousaf said that applying the label of “soft justice” to community-based punishment was “misleading and damaging”.

He added: “If we are to take the public with us on this, we should present them the evidence that shows if you want to have less victims of crime then you should do what is going to rehabilitate more individuals.

“The evidence speaks for itself that community alternatives are much more effective in that rehabilitative journey than custodial sentences.”

On the issue of encouraging more sheriffs to hand out community-based sentences, Mr Yousaf said: “Judicial confidence is absolutely key to making the presumption a success, as well as resourcing.

“It can be, frankly, a little bit patchy in relation to the confidence that sheriffs and judges will have across the country and that is why Community Justice Scotland are doing a power of work to try to instil that greater degree of confidence and reassurance amongst our judiciary.”

He added that sheriffs have said they do not get any feedback about the outcome of a person’s community payback order – whether it had been successful or the offender had breached it or reoffended – and if they were to get that information “they would be much more predisposed to give those community alternatives”.

Asked about funding and resource concerns raised by witnesses from the social work sector who deal with convicts in community-based punishments, Mr Yousaf said he expected a “moderate impact”, with approximately 1,300 additional community sentences a year.

“I don’t think it’s going to overwhelm the system,” he added.

Following the Justice Secretary’s evidence, seven members of the committee voted in favour of the proposals while both Conservative MSPs voted against.

The committee will write a report summarising the evidence before the Scottish Parliament as a whole will get the chance to vote on whether to extend the presumption against short sentences.

Following the decision, Scottish Liberal Democrat justice spokesman Liam McArthur said: “All the evidence shows that sending someone to prison for a matter of months often causes much more damage than good.

“By contrast, robust community-based sentences have a much better track record of allowing rehabilitation and reducing reoffending rates.

“Ministers must now ensure that criminal justice social work and the third sector have the resources they need to deliver the change in policy. It is not good enough to will the ends, without willing the means.

“Nevertheless, this is a welcome step in making our criminal justice system more progressive and effective.”

Rule of 6 and 10pm curfew likely had 'zero effect' on transmission, study suggests