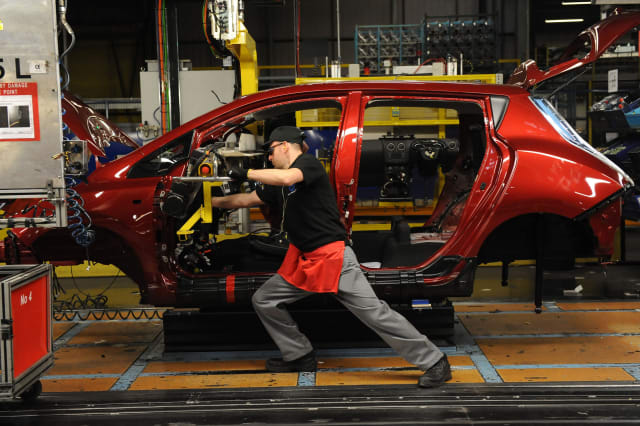 Growth in the British economy slowed in the three months to April, as a drop in car production following the original Brexit deadline hit output.

Gross domestic product (GDP) was up by 0.3% in the three months to April, according to the Office for National Statistics (ONS).

This marked a slowdown on the rolling three-month level for January to March, when growth was at 0.5% thanks to the highest quarterly pick-up in manufacturing since the 1980s.

The pound weakened against the US dollar following the disappointing figures, dropping 0.4% to 1.268.

On a month-to-month basis, GDP contracted by 0.4% in April, faster than the 0.1% decline expected by economists.

This was due to a drop in car manufacturing after several automobile plants went ahead with planned shutdowns, which had originally been scheduled to coincide with the immediate aftermath of Brexit.

Although the production sector increased by 0.7% in the three months to April, monthly growth slumped by 2.7%.

Transport equipment was the biggest drag, contracting by 13.4% in April.

Rob Kent-Smith, the ONS’s head of GDP, said: “GDP growth showed some weakening across the latest three months, with the economy shrinking in the month of April mainly due to a dramatic fall in car production, with uncertainty ahead of the UK’s original EU departure date leading to planned shutdowns.

“There was also widespread weakness across manufacturing in April, as the boost from the early completion of orders ahead of the UK’s original EU departure date has faded.”

Construction was up 0.4% in the same period, boosted by strong growth in infrastructure.

“We had been expecting GDP growth to be no more than 0.2% quarter on quarter in the second quarter but even this muted performance is now looking somewhat optimistic – as it is hampered by some unwinding of the major stockbuilding that occurred in the first quarter amid concerns of a disruptive Brexit occurring at the end of March,” he said.