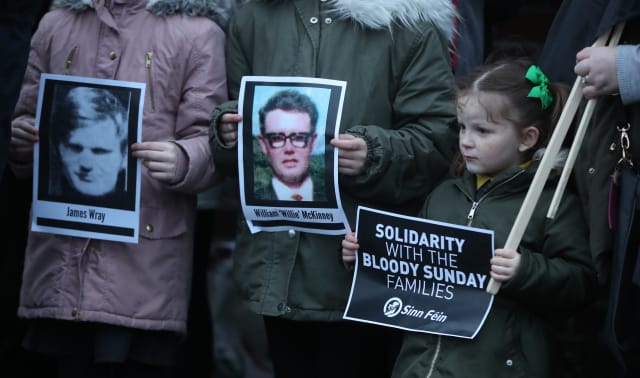 Families bereaved by the Northern Ireland Troubles have told a rally that they deserve the right to truth and justice.

Several thousand people, including campaign groups, took the streets of Belfast city centre to call for action on dealing with the legacy of the past.

In the second Time for Truth march, victims of the Troubles marched in three separate groups to Belfast City Hall carrying black flags, banners and pictures of their loved ones.

Families of those killed in the Loughinisland massacre, Ballymurphy massacre, Bloody Sunday and the Sean Graham bookmakers shop – as well as several other fatal incidents – took part in the rally.

They have vowed to continue their campaign for truth.

Several senior politicians from Sinn Fein, as well as the SLDP’s Nichola Mallon, joined the march.

Campaigners are calling for the implementation of legacy mechanisms in the Stormont House Agreement, funding to clear the backlog of legacy inquests, and the funding of the Police Ombudsman’s Office to complete outstanding legacy investigations.

Carmel Quinn’s brother John Laverty was 20 years old when he shot on the Whiterock Road, Belfast on August 11, 1971.

Ten civilians died following a series of shootings in what became known as the Ballymurphy massacre in west Belfast over August 9-11 1971.

Fresh inquests are taking place into their deaths in Belfast.

Ms Quinn said: “At the moment, we have an inquest that is ongoing and it is nearing completion, but there are families here who haven’t had any kind of recognition or procedure to look into what happened their loves ones.

“Now we are getting some kind of truth of what happened.

“Every family deserves a right to truth and an Article 2 inquest.

“There is a process there, it’s called the Stormont House Agreement and the mechanisms are there and they need implemented.”

John Kelly, whose 17-year-old brother Michael was among those murdered in Blood Sunday in Londonderry, said the campaign for truth will continue into the next generation.

“We will achieve truth and justice for our people,” he told the crowd.

Organiser Ciaran McAirt said the group does not believe in a hierarchy of victims.

He said: “The Time for Truth campaign does not believe in the myth of blamelessness, all actors in the conflict have their parts to play to help the families in the pursuit of truth.

“We need to be very wary as the British State and its police force here have been consistent in their legacy for dealing with the past. They followed a simple three-prong strategy of denial, delay and death.”

Paddy Murray, solicitor for the Ballymurphy families, addressed the crowd: “This has been a difficult time for campaigners and families who have had inquests delayed and we’ve an Ombudsman Office which has been under-resourced.

“We’ve had many families who have yet to have independent investigations into the deaths of their loved ones yet we’ve had Tory MPs and the DUP bending over backwards to legislate to protect soldiers.

“If one section of society has access to the justice system, that’s not real justice, that’s privilege and it’s imperative that we all stick together until all of the families have justice.”

She said: “We have joined thousands of families who have come along for the march.

“They have come together to say that it’s time for truth. What they are asking for is very simple.

“It is not good enough, it is not tolerable that these families have been denied access to justice.”