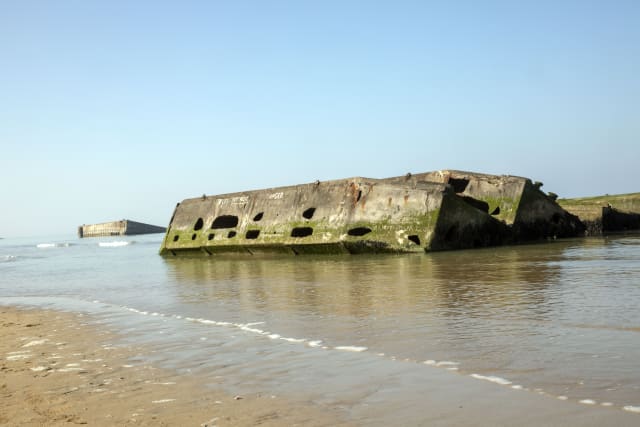 The D-Day securing of Arromanches paved the way for an unprecedented feat of military engineering.

The seaside town was secured following the allied landing on France’s northern coastline.

But success at Arromanches was based on a strategy formed shortly after a raid on the port of Dieppe two years earlier and based on an idea dreamt up by Winston Churchill in 1915.

In 1942, British and Canadian troops attacked Dieppe but their mission was not a military success – no tanks made it off the shore and the allies suffered huge casualties.

But the effort furnished them with crucial information which ultimately led to the success at Arromanches and consequently the securing of northern France.

Returning from Dieppe, military strategists decided that invading a French harbour would be impossible, given that it would be destroyed by the enemy before they could get a foothold.

Professor Jeremy Black, a military historian at the University of Exeter, said: “The problem with the Dieppe raid was that it provided the Germans with a concentrated target and the harbours at Dieppe and Cherbourg were well protected.

“What Dieppe showed was that you needed complete air superiority and that had been obtained by the spring of 1944, which wasn’t simply there in 1942.”

But at the same time, the allies realised invasion was impossible without a harbour to bring in large ships carrying all the resources to fight a war.

Consequently the only option was to land on a sandy beach with the capacity to hold the weight of tanks – and bring a harbour with them.

Surveyors working in France eventually decided upon the beaches now known as Gold, Sword, Juno, Utah and Omaha, to the east of the port at Cherbourg, as targets for their landings.

Meanwhile, back in Britain, the allies began the secret creation of the famous Mulberry harbours.

Some 15,000 people were involved in the construction, but almost no-one knew exactly what they were creating.

Made from concrete blocks and steel structures, the harbour took about 10 months to design and build. Once assembled, it was five miles long.

Roughly the size of the harbour at Dover, it was then floated across the Channel in about 400 parts overnight.

Following the D-Day beach invasion, the allies sank 60 old ships to the west of the planned harbour site – in essence a breakwater designed to create calm conditions so they could set down the harbour itself.

This was then brought in to Arromanches and named Port Winston.

Prof Black said the Mulberry harbours and the Pluto pipeline under the English Channel were crucial in supplying the Allied forces during the Battle of Normandy.

“That was necessary because at that point the British and Americans did not have a port they could use,” he said.

“That was exacerbated by the fact the first major port they acquired, which was Cherbourg, was extensively damaged by the Germans in the process of defending it.

“The fuel consumption of the tanks was enormous, as was the demand for food and ammunition for the troops.

“All that had to be brought in and although you could airdrop a certain amount of stuff, airdropping was not reliable and only could be done in relatively small quantities, so you really needed harbours of some kind.”