From Gucci to Dior: Every designer outfit Melania Trump has worn for state visit 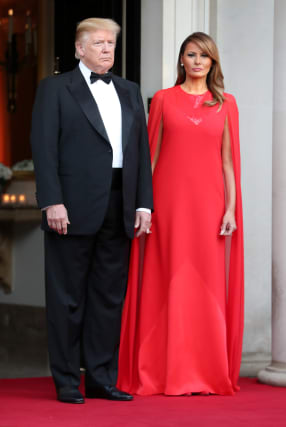 As the three-day US state visit to the UK comes to close, fashion-wise all eyes have been on the glamorous Melania Trump, and she hasn’t disappointed.

The wife of the US president has shown off six ensembles, so far, from a variety of luxury designers.

From her travel outfits to custom evening looks, here’s what you might have missed…

The fashion parade began before Air Force one had even departed for the UK.

Mrs Trump was pictured boarding the presidential plane in a Gucci shirt dress printed with images of London, including Big Ben and the Houses of Parliament. Coincidence? Probably not.

Touching down at Stansted on Monday, the 49-year-old had changed into a navy blue pencil skirt and a red, white and blue printed blouse, a navy jacket slung over her shoulders in typical “shoulder robing” style.

Later that day, the couple arrived at Buckingham Palace, greeted by Prince Charles and the Duchess of Cornwall.

Attending a ceremonial welcome by the Queen and a garden party, Mrs Trump chose a white pencil dress with navy trim, a custom design by Dolce & Gabbana, and a matching hat by Hervé Pierre.

The prim ensemble drew comparisons to Mary Poppins and Eliza Doolittle, with some saying the former model was paying homage to traditional British style.

The Trumps returned to Buckingham Palace on Monday night for a state banquet attended by the Queen, the Duchess of Cambridge and other members of the royal family.

On Tuesday, the Trumps headed to Downing Street to meet with Theresa May and her husband Philip, later attending a garden party at the Prime Minister’s residence.

The first lady rarely recycles outfits, but she did on this occasion, choosing a Celine trench she first wore a year ago, teamed with black belt, gloves and Hermes bag.

The choice of the trench, a typically British outerwear style, designed when Brit Phoebe Philo was at the helm of the brand, was seen as another nod to British fashion.

For the second state banquet of the trip, hosted by the Trumps at the US Ambassador’s residence, Mrs Trump sported the most glamorous outfit of the trip.

Givenchy’s creative director is British designer Clare Waight Keller, who created the Duchess of Sussex’s wedding dress – Mrs Trump’s evening gown was seen as yet another tribute to British fashion.