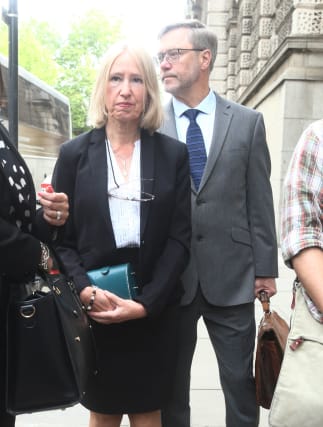 The mother of a young Muslim convert dubbed Jihadi Jack wept in court as she described her fears for her son after he called to say: “Mum, I’m in Syria.”

Sally Lane told of the “tightrope” she and her husband John Letts were forced to tread as they tried to keep in contact with Jack Letts.

The couple are on trial at the Old Bailey accused of sending or trying to send sums totalling £1,723 to their son, even though they had every reason to believe he had joined Islamic State.

He was 18 when he left home in Oxford and travelled abroad, married in Iraq and moved to Raqqa in Syria, jurors have heard.

His parents allegedly ignored repeated warnings that they faced legal trouble if they tried to help their son while he was in IS territory.

Giving evidence at the Old Bailey, Lane told jurors her son had initially gone to Jordan and Kuwait for study and tourism.

She said: “He seemed like he was enjoying himself, relaxing and enjoying the country.”

But on September 2 2014, phone records showed a flurry of calls.

Lane said: “That was the day I found out. Jack phoned me. I was alone in the house. It was just a very quick phone call. He said, ‘Mum, I’m in Syria’.

“I was horrified. I screamed at him, ‘How could you be so stupid? You will get killed. You will get beheaded’.”

Jack Letts, who is said to suffer from obsessive compulsive disorder, did not phone again until September 24 2014.

Lane said: “He apologised for not having phoned since that call. He said he had been ill. He had been travelling.

“He did not say exactly where he was. He tried to be reassuring, saying everything is fine. It’s a civilian area, it’s not a war zone. Someone had looked after him when he was ill and not to worry.”

Defence lawyer Tim Moloney QC asked: “How did all that contact make you feel?”

Lane replied: “In the first few weeks, we did not know whether he was alive or dead. At least we were reassured he was alive.”

She attempted to use a £5,000 inheritance from her son’s grandfather “as a bribe” to encourage him and his new wife Asmaa to get “somewhere safe”.

But on May 21, he posted a photograph of himself in Raqqa, Syria.

Meanwhile, the family continued to have “acrimonious” religious and political debates from afar.

Lane said: “It was a bit different when he is actually in the region rather than in our kitchen.”

On July 30, she said she felt “sick” when her son appeared to threaten to behead an old school friend, Linus Doubtfire.

Mr Doubtfire had posted a picture on Facebook as he completed his Commando Artillery Course in the British Army.

Jack Letts commented: “I would love to perform a martyrdom operation in this scene.”

His mother told jurors: “I thought it was not him because it was a public post. Jack had told me that other people used his account.

“Around this time also we were receiving false information. I received a message on an account saying he was dead, for instance.”

Asked how she felt about the post, Lane said: “Absolutely sick. It was so out of character. He had never said anything violent before. I just thought it didn’t sound like him.”

The court heard how Lane came to send £223 of the inheritance to Lebanon on September 2 2015.

Her son reassured her it was “nothing to do with jihad” when he sent her a selfie sporting a beard and long hair.

Lane replied that she was “worried” about the state of his teeth, adding: “I’m not averse to sending the money, as you know.

“I would go to prison for you if I thought it gave you a better chance of actually reaching your 25th birthday.”

On her feelings at the time, Lane told jurors: “I was a little bit nervous but I wanted to maintain that contact with Jack and I needed him to trust us and we needed to trust him and it seemed to be a good link.”

Asked if she had any idea the money might end up in the hands of terrorists, she said: “No. I actually thought it might enable Jack to get to Lebanon.”

On a stream of acrimonious messages, Judge Nicholas Hilliard QC observed: “You wanted to keep in touch with your son but at the same time not give in to some of the things he was saying. That was the tightrope you had to walk.”

Lane agreed, saying there was a constant danger of IS enforcers on the lookout for “British spies”.

She wiped away tears as she told jurors: “Generally with these messages, even if we were having an argument it would not bother me so much because I thought it was safer for him if someone was reading them.”