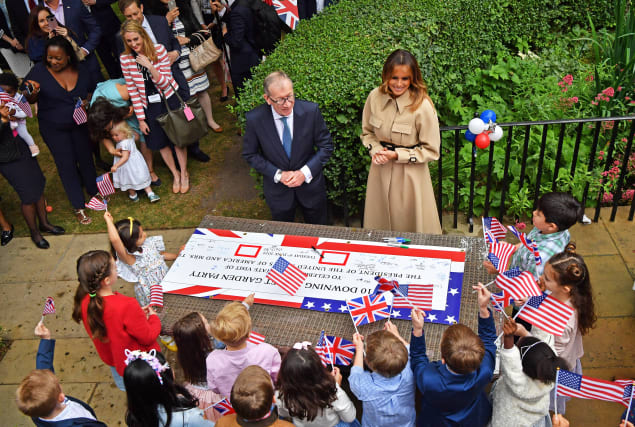 First Lady Melania Trump and the Prime Minister’s husband, Philip May, met children as they attended an Anglo-American themed garden party together at Number 10.

Mrs Trump hugged a little girl who presented her with a bouquet of flowers as she and Mr May mingled with the children of US embassy and Downing Street staff.

Meanwhile, their other halves had lunch with their delegations inside Number 10.

A brass band played as the families enjoyed a range of British and American games, from croquet to basketball, and drank lemonade and ate popcorn and hot dogs from stalls in the garden.

Red, white and blue bunting and balloons adorned the garden and the children waved the flags of both countries.

Rain held off for the party despite a downpour shortly before it started.

The First Lady and Mr May signed a banner marking the event, watched by children.

Last year, Mr May and Mrs Trump visited the Royal Hospital Chelsea together during the US president’s working trip to the UK.