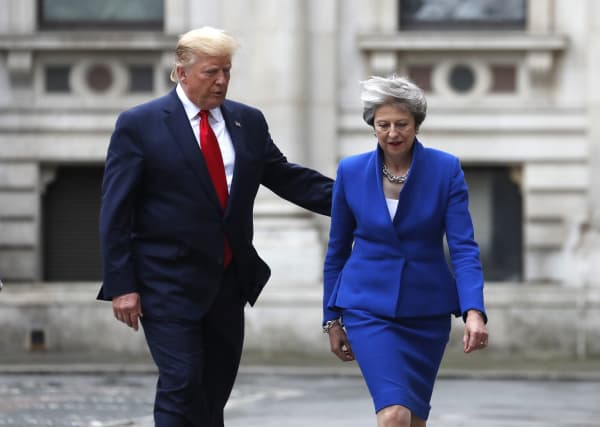 A personalised Air Force One jacket, a Tiffany brooch, an Emma Bridgewater tea set and Winston Churchill mementos are among the gifts exchanged so far during US President Donald Trump’s state visit to the UK.

As part of the long-held tradition of heads of state swapping official presents, Mr Trump and First Lady Melania Trump gave a gift to the Queen – and also brought along something for the Duke of Edinburgh.

Philip now has his own personalised Air Force One jacket from the Trumps, while the Queen has a new Tiffany silver and silk poppy brooch.

American leader Mr Trump received a copy of one of the most significant documents in the transatlantic “special relationship” from Prime Minister Theresa May and her husband Philip.

It was a copy of Sir Winston’s personal draft – with his amendments in red pencil – of the 1941 Atlantic Charter, agreed with President Franklin D Roosevelt, setting out their vision for the post-war world.

Mrs Trump was given a bespoke tea set made by designer Emma Bridgewater by Mr and Mrs May.

Asked why Mr Trump was being given a historically significant gift, while his wife was being given a tea set, the Prime Minister’s spokesman said: “I think they are both gifts which have been carefully chosen.”

The tea set was “a memento of a visit to Number 10 as part of what we hope will be a successful state visit”.

The Queen also turned to Churchill for her gift to Mr Trump – a first edition of The Second World War by Sir Winston from 1959.

Presented after a private lunch on Monday at Buckingham Palace, the crimson book features gold tooled decoration on the cover, spine and inner cover, an EIIR cypher in gold on the front, silk endpapers and hand-sewn headbands in colours of the US flag with all pages edged in gilt.

Mrs Trump was presented with a specially-commissioned silver box with a handcrafted enamel lid from the monarch.

Its royal blue decoration featured roses, thistles and shamrocks to represent the ceiling of the palace music room.

The Duke of Edinburgh, who has retired from public duties and spends much of his time at Wood Farm on the Sandringham estate, is not taking part in the official engagements as part of the US state visit and did not meet the Trumps at the palace behind the scenes.

A personalised Air Force One jacket – worn over the years by many a president – is usually navy, features the presidential seal, with the embroidered words Air Force One in white on one side of the chest, and the wearer’s name in italics on the other.

Air Force One – which can be any Air Force aircraft carrying the American leader – usually refers to specific planes equipped to transport the president, who is also the US’s Commander-in-Chief.

According to the White House website, Air Force One is “one of the most recognisable symbols of the presidency, spawning countless references not just in American culture but across the world”.

It adds: “Emblazoned with the words United States of America, the American flag, and the Seal of the President of the United States, it is an undeniable presence wherever it flies.”

Air Force One, which is capable of refuelling mid-air, can withstand electromagnetic pulses and is able to function as a mobile command centre in the event of an attack on the US.

It has 4,000 sq ft of floor space on three levels, including an extensive suite for Mr Trump with a large office, toilet and conference room, as well as a medical suite which can transform into an operating theatre, an onboard doctor and two food preparation galleys which can feed 100 people.

On the Tiffany & Co website, an Elsa Peretti sterling silver and red silk brooch – called Amapola after the Spanish word for poppy – is for sale for £600.

Philip was also brought a first-edition signed autobiography by James Doolittle: I Could Never Be So Lucky Again.

American hero General Doolittle was an aviation pioneer who led the daylight air raid on Tokyo and other Japanese cities four months after the Japanese attacked Pearl Harbour.

During a tour of Royal Collection items in the Buckingham Palace picture gallery on Monday, the president was unable to remember a pewter statue of a horse that he gave the Queen as an official gift when they met at Windsor Castle in July last year.

Tim Knox, director of the Royal Collection, said when Mr Trump was asked if he recognised it, he replied “no” but “the First Lady did recognise it, which is rather nice”.

Mr Knox joked: “But one horse looks very much like another.”