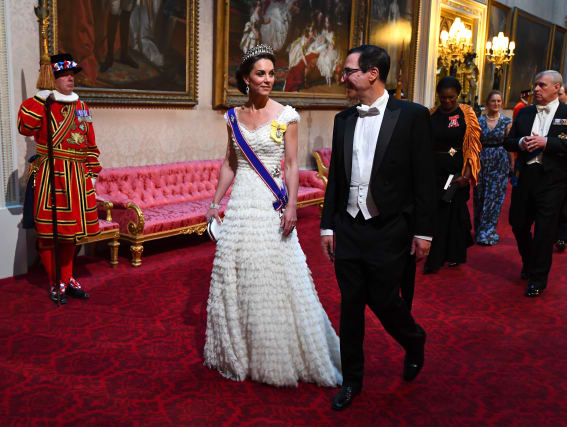 The Duchess of Cambridge has worn her sash and star of the Dame Grand Cross of the Royal Victorian Order for the first time.

Kate stepped out in a ruffled white Alexander McQueen gown, wearing the dark blue sash edged in pink over her right shoulder and the star on the left side of her waist, as is the custom.

The duchess was awarded the prestigious honour by the Queen in April on the day she celebrated her eighth wedding anniversary.

It was given in recognition of her efforts supporting the head of state since marrying into the royal family in 2011.

Her tiara was her go-to choice for banquets – the diamond and pearl Lover’s Knot, which was a favourite of the late Diana, Princess of Wales.

Her sapphire and diamond earrings were loaned by the Queen.

She also wore her Royal Family Order, a portrait of the Queen on a yellow ribbon.

White appeared to be the theme for gowns on Monday evening, with the Queen dressed in a state evening gown with crystal centred daisies by Angela Kelly, with a Burmese ruby and diamond tiara and a ruby and diamond necklace.

The Duchess of Cornwall wore a cream embroidered evening gown by Bruce Oldfield, as well as the diamond boucheron tiara, a pearl and rose topaz choker and diamond earrings.

Donald Trump’s younger daughter Tiffany Trump was dressed in a dark red off-the-shoulder velvet gown and wore her hair down.

She also opted for long white gloves like her stepmother Melania.

Eric Trump, in white tie and tails, was seen smiling with his wife Lara, who wore a black and white patterned gown, also with long white gloves, as they made their way to the grand ballroom.