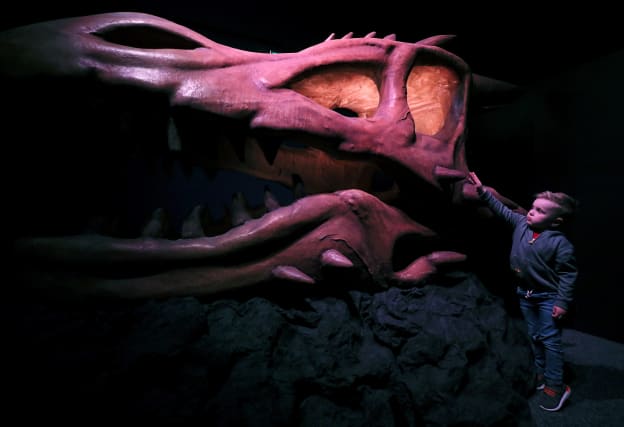 Northern Ireland’s myths and legends are being showcased in the first exhibition at a new immersive attraction.

The region has become world famous as the backdrop for HBO TV hit Game Of Thrones, but the director of the new £1 million feature at W5 in Belfast said the area’s native stories are even more fantastical.

Amaze is the UK and Ireland’s first tourist attraction to combine all the elements of immersive soundscapes, multi-screen projections, physical props and structures, 360-degree projection and augmented reality (AR) portals.

The first exhibition is Land of Legends, which tells the dramatic story of how Northern Ireland’s formation by fire and ice forged landscapes to give rise to mythical tales of giants and dragons.

W5 chairwoman Catherine O’Mullan described Amaze as an important part of the development and transformation of the visitor attraction at the Odyssey complex.

“This immersive technology will allow us the opportunity to create new exhibitions that will appeal to people of all ages,” she said.

“For our first exhibition, we have had the privilege of working with some of Northern Ireland’s most creative individuals to bring this fantastic experience to life, including Game Of Thrones storyboard artist William Simpson and local landscape photographer Tony Dalton.”

Adrian Lutton of the Odyssey Trust said Northern Ireland’s incredible mythology was the inspiration behind the first exhibition.

“The Amaze space will give us the chance to tell stories in a completely different way, like virtual reality only for mass participation, you can get lots of people in at once,” he said.

“I have always been interested in the myths and legends of Northern Ireland. With all the interest in Game Of Thrones and the landscape here too, we wanted the tell the story about the land and how it inspired the tales, and maybe introduce these stories to people who hadn’t heard them before.

“The dragon of Banagher Glen is a good one, a story about a serpent who became a dragon. Most people hadn’t heard that tale before and it fascinates people of all ages, dragons in Ireland.

“This is the first time we have used all the kit but we have plans for the future to tell all kinds of stories in different ways.”

The project was supported by the Inspiring Science Fund, the Odyssey Trust and Tourism NI.

It is part of a planned £4.5 million investment in W5 to create eight themed zones, scheduled to be completed by June next year.

Amaze at W5, Northern Ireland’s Science and Discovery Centre, will open to the public on June 1.