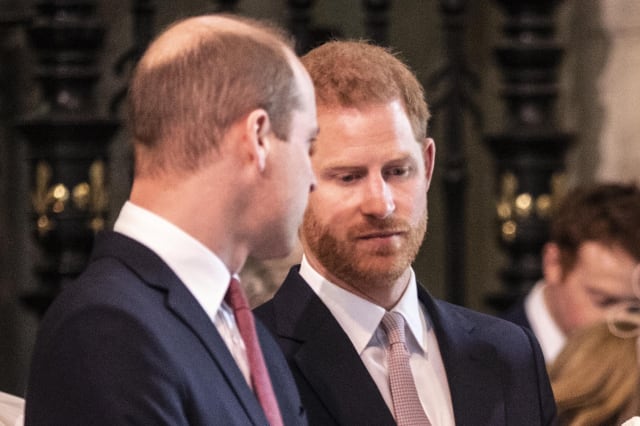 Prince William and Prince Harry did not see each other in private for six months after the wedding last May, says one royal correspondent.

Reports of a fall-out between the Cambridges and Sussexes emerged at the end of last year, following the news that Harry and Meghan would be moving to Frogmore Cottage in Windsor before the birth of their first child

Emily Andrews, royal correspondent for The Sun, tells Yahoo UK's The Royal Box: "I was told, after the royal wedding, Harry and Meghan didn't see Kate and William personally."

While the two couples were pictured together at formal events such as Trooping the Colour and Princess Eugenie's wedding, Andrews says they did not see each other in a private capacity, despite them all living within the grounds of Kensington Palace at the time.

Andrews adds that one of William and Harry's Kensington Palace aides said to her that they had made a mistake in "continuing this narrative of the brothers in arms."

She continues: "We all remember those two young boys walking behind Diana's coffin and we as a nation, our heart went out to them, that really is how we've seen them ever since.

"I think behind the scenes, Harry and William's relationship has always been up and down actually but of course, we've never really seen that."

Andrews thinks the best thing that could have happened for their relationship was the splitting of the Cambridges' and Sussexes' joint royal household in March: "I think that has improved matters."

She says that part of the reason for the fall-out was down to when William gave some 'brotherly advice' to Harry when he first began dating Meghan.

The Duke of Cambridge knew the relationship was moving quickly between his younger brother and the former actress and advised Harry to take things slow, before asking any woman to marry into the Royal Family.

Andrews says: "I think it was meant very kindly in a well-meaning way but Harry was very defensive of Meghan and took it completely the wrong way and said to William something along the lines of 'You're trying to destroy this relationship before it's even started.'"