Gran, 81, to cycle length of Britain in memory of her three children 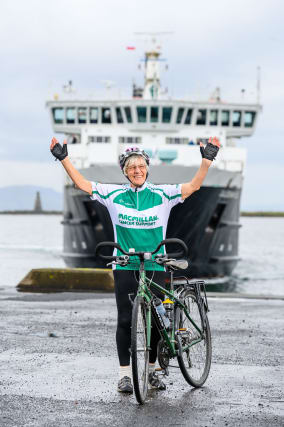 A grandmother is setting out to cycle the entire length of Britain in memory of her three children who died within four years of each other.

Mavis Paterson, from Wigtownshire, sets out on Thursday morning from Land’s End and aims to reach John O’Groats in around three weeks time on June 19.

The Guinness Book of Records has already confirmed the 81-year-old will become the oldest woman to do so once she completes the 960-mile route.

She hopes to raise £20,000 for Macmillan Cancer Support, a charity she started to support after her mother and sister died from the illness.

Mrs Paterson said: “I’m excited and a little bit nervous about getting started, however it’s something I really want to do.

“It will be nice to get the world record, but for me I’m doing it to raise money for Macmillan and because cycling and taking on big challenges help me cope with the unimaginable grief of losing my children.

“It’s impossibly hard going from being part of a family of five to being alone, but taking on challenges like this that keep me going, and I’m happy I can do it to raise money for Macmillan.

According to Mrs Paterson’s JustGiving fundraising page, her three children died within four years of each other while all in their 40s: Sandy in 2012, Katie in 2013 and Bob in 2016.

“I’ve taken on big challenges before, but this will be the toughest. I really hope people consider donating to help me meet my £20,000 target.

“It will be a great boost to know I’m helping raise so much money on the day when I’m struggling.”

Last year the pensioner completed a 24-hour cycle and 10 years ago she cycled across Canada to raise money for the same charity.

Macmillan staff and volunteers will join her and cycling companion Heather Curley for parts of the ride.

A specially-designed campervan provided by Scottish firm Tunnock’s will also follow them – stocked with caramel wafers and tea cakes.

He added: “The challenge she has set herself is astounding and we cannot wait to cheer her on to get that world record.

“Her determination, incredible level of fitness and her generosity, is astounding. We are so thankful that she has picked Macmillan as the charity she wants to support.

“Macmillan relies almost entirely on donations and it’s only thanks to people like Mavis, and their remarkable determination to take on challenges like this, that we are able to continue to support the growing number of people who need us.”

Donations can be made at justgiving.com/fundraising/mavis-paterson1