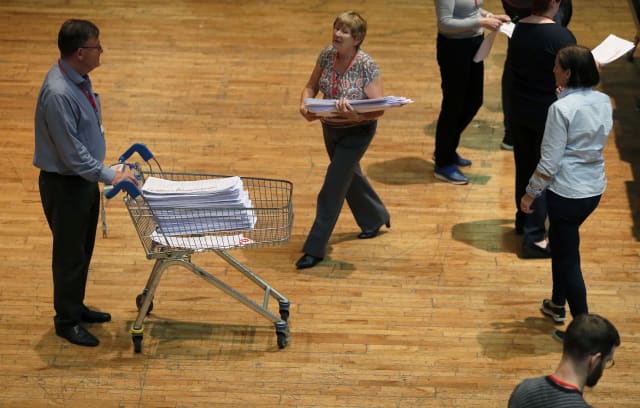 Ten of Ireland’s 13 MEPs have been elected as marathon European Parliament counts continue into a fourth night.

Two of the three constituencies – Midlands North West and Dublin – have completed concluded counting, with only three candidates remaining to be elected in the South constituency.

After a day without any major developments, four candidates were elected in a flurry on Wednesday evening.

Independent Luke “Ming” Flanagan was returned above the quota in Midlands North West to join Fine Gael’s Mairead McGuinness in booking a return trip to Brussels and Strasbourg.

Sinn Fein’s Matt Carthy, also an existing MEP, and Fine Gael’s Maria Walsh, a former Rose of Tralee, were also both elected at the Castlebar count, though under the quota.

He is the second person to be elected to the constituency after sitting MEP and former GAA president Sean Kelly was returned on Tuesday.

Independents4Change candidate Mick Wallace is hoping to be next over the line in South.

The winner of the last seat will be one of Ireland’s two “cold storage” MEPs. The country has been allocated two additional European Parliament places as a result of Brexit.

As the UK is still to leave the EU, the holders of those two seats will essentially have to sit on the subs bench and will only become confirmed MEPs once Brexit happens

Barry Andrews of Fianna Fail has already taken one of the two added seats, having finished in fourth place in the Dublin constituency count, which finished on Tuesday afternoon.

Weary election workers could still be facing hours sorting through ballots before the count is finally over in Cork.

The counts for the 949 council seats, which stretched from Saturday morning to Tuesday night, saw Fianna Fail retain its position as the largest party at local government level, with Fine Gael not making the gains it had hoped for.

The Green Party enjoyed a surge in support, while Sinn Fein lost a raft of councillors.

Voters delivered a resounding Yes vote on Friday to liberalise Ireland’s divorce laws, with the length of time separated couples must wait to obtain a formal divorce set to be halved.

There were also plebiscites in Cork, Waterford and Limerick on government proposals for directly elected mayors with executive functions.

Voters in Cork and Waterford rejected the idea but Limerick voted in favour.

In the European election in Northern Ireland, the cross-community Alliance Party registered another electoral upset when leader Naomi Long took the second seat.

Incumbent MEPs Diane Dodds, of the DUP, and Sinn Fein’s Martina Anderson secured the other two seats in Monday’s count.