Stars to descend on Glasgow for 16th Piping Live! festival 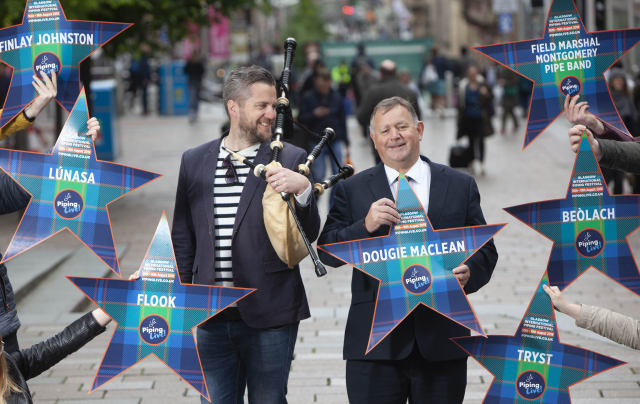 A host of music stars from around the world will descend on Glasgow this August for the 16th year of the Piping Live! festival.

The international piping event returns to the city from August 10-18, with more than 5,000 pipers performing at 150 events.

Acts will travel from as far as New Zealand, Malaysia and Canada, attracting more than 40,000 music fans to Glasgow.

Performers including Dougie MacLean, Finlay Johnston, Daimh and Lunasa were announced for the festival with Hollywood-style stars displayed in Buchanan Street.

Festival director Roddy MacLeod said: “Each year, we bring the stars of traditional music to Glasgow, so this year we decided to pay tribute to them by creating our very own Piping Walk of Fame to unveil our headliners.

“Our 16th year is set to be an incredible festival – we have some of the biggest performers putting on events throughout the city, family fun at our Street Cafe and evening concerts not to be missed.

“There really is something for everyone and we look forward to enjoying an amazing event with you all in August.”

General tickets for the festival go on sale from Friday.