General election before Brexit would be catastrophic, Jeremy Hunt says 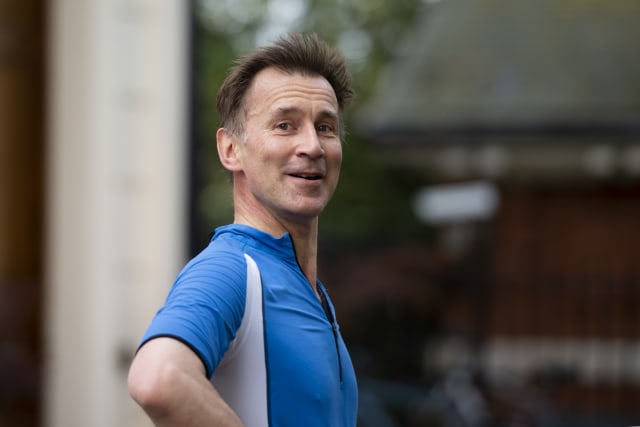 Tory leadership contender Jeremy Hunt has warned that triggering a general election before delivering Brexit would be "catastrophic" for his party, as he proposed finding a "different way" to get an exit deal.

The Foreign Secretary, who is among 10 MPs vying to be the next prime minister, said a failure to solve Brexit could lead to the end of the Conservatives and warned the "biggest risk" to delivering on the referendum was a general election.

His comments came as Housing Minister Kit Malthouse became the latest person to enter the race to succeed Theresa May, saying it was time for a "new generation to lead the charge into our future with boldness and vision".

Mr Hunt told BBC Radio 4's Today programme: "I'm worried that if we don't solve it (Brexit), we will face a political crisis that is far bigger actually than our legal relationship with the EU, it could lead to the destruction of our party system and the end of my own party."

The 52-year-old, who campaigned for Remain in the 2016 referendum but has become increasingly Eurosceptic, said he had "always believed we should keep no deal on the table" as it is the "best way of getting a good deal".

"I've always thought that ultimately our economy would find a way to flourish even with the shock of no deal, but the biggest risk to Brexit now is ... a general election."

He added: "We must not go back to the electorate asking for their mandate until we've delivered what we promised we would do last time, which is to deliver Brexit, it would be absolutely catastrophic for us as a party."

Mr Hunt said it was important to "find a different way to get a deal", adding "we have to have a go at this" as he proposed forming a new wider negotiating team.

A team of DUP, ERG, Scottish & Welsh representatives would be Foreign Sec @Jeremy_Hunt's plan for renegotiating a Brexit deal with the EU. "It would include people who say if we can't get the right deal we should leave with no-deal" #r4todayhttps://t.co/pUfzHiRulApic.twitter.com/H0PeP8L867

"The only solution to the extremely difficult situation we're in – and I don't want to pretend that there's an easy way through this – is to change the Withdrawal Agreement," he added.

Meanwhile, Mr Malthouse, widely credited as the convener of both Conservative Leavers and Remainers to develop a compromise on Mrs May's Withdrawal Agreement, said there was a "yearning for change".

The MP for North West Hampshire is the tenth hat in the ring after Mrs May called time on her Downing Street tenure, with Michael Gove, Matt Hancock and Boris Johnson among those to have already declared their candidacy.

The 52-year-old is a former deputy mayor of London and entered the Commons in 2015 as David Cameron's Conservatives won a majority.

His name was given to the so-called Malthouse Compromise – a proposal drawn up by backbenchers from Leave and Remain wings of the Tory Party, which would have implemented Mrs May's Brexit deal with the backstop replaced by alternative arrangements.

Writing in The Sun, he said: "This leadership campaign cannot be about the same old faces, scarred by wars that have split the Tory party over three years.

"We need to end the Brexit paralysis, and while I voted to leave the EU, I know that without unity across the UK, we cannot get a deal over the line.

"It's time for a new generation to lead the charge into our future with boldness and vision."

As the race to succeed Mrs May enters its first full week, candidates for the top job are starting to offer a flavour of their policies should they win a ballot of Conservative Party members later this year.

Mr Gove is prepared to offer free UK citizenship to three million nationals who resided in the UK at the time of the June 2016 referendum, a number of national newspapers report, while Mr Hancock wrote in the Daily Mail about "driving up the living wage and cutting taxes".

The Health Secretary wrote: "Instead of yet another battle over Brexit, the next election should be about the economy – the territory on which the Conservative Party wins.

"It should be a clear choice between higher pay with the Tories or higher taxes with Corbyn's Labour."

The bitter battle to set the course for the party on Brexit has continued, with Mr Hunt penning a piece for the Daily Telegraph warning a no-deal Brexit would be "political suicide".

He was immediately attacked by Tory leadership hopeful Esther McVey, who tweeted: "Political suicide actually lies in not having a clean break from the EU and not leaving on October 31."

Other Tory MPs vying for the top job include Cabinet colleagues Sajid Javid and Rory Stewart.

The Mid Sussex MP and 36-year veteran of the Commons wrote in the Daily Mail that there was only one person who had put their name forward "who can sort out Brexit, unite our party and restore pride and hope to Britain".

He said: "That person is Rory Stewart. I am honoured to support him.

"Some say we can leave the EU without a deal. But this would be the greatest insult to the wisdom and understanding of the British people.

"They don't want a leader who offers to ruin our country. They want one to lead it.

"Easy lies and false simplicities got us into this mess. They will emphatically not get us out of it."

Former Cabinet ministers Andrea Leadsom and Dominic Raab have also thrown their hats into the ring to replace Mrs May.