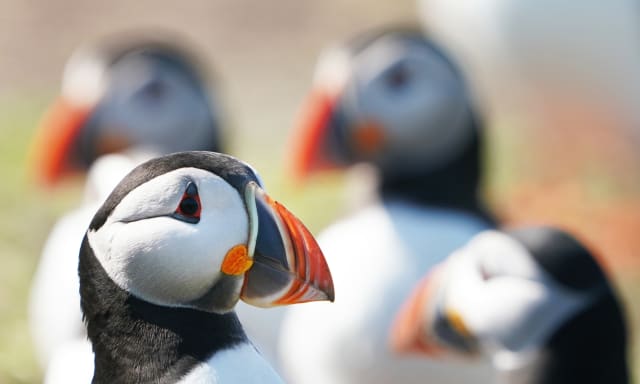 Wildlife experts have carried out the first ever puffin count on the island of Staffa, finding hundreds more birds than expected.

The island, famed for the hexagonal basalt columns of Fingal’s cave which inspired 19th century composer Felix Mendelssohn, is home to a significant colony of puffins.

Until now it has not been possible to safely access slopes where the birds’ burrows are located to carry out a proper count, and estimates placed the population at 150 to 450 pairs.

However, surveyors trained in rope techniques were able to carry out the first proper count last week on the Hebridean island, which is owned and protected by the National Trust for Scotland.

Conservationists said the count will help create a picture of how the species is coping with climate change.

“Until now, we’ve never known how many actually nest on the island because they dig their burrows on slopes that are too steep to access safely.

“We’ve therefore had to make do with estimating the population and we’d thought it was somewhere between 150–450 pairs.”

Over the course of May 20 and 21, the surveyors lowered and swung themselves over the steep, rocky slopes to investigate and found more than 600 burrows.

Dr Luxmoore said: “They succeeded in confirming that there are 637 apparently occupied puffin burrows – much higher than we’d hitherto suspected – and now we have the highest and most accurate estimate we’ve ever had of an otherwise well-known colony.

“With this success, we now plan to use the same techniques in a much larger survey of puffin burrows later this summer on St Kilda.

“We will be able to obtain an accurate estimate of numbers in some of the more remote islands of the archipelago.

“Getting an accurate count like this is vital if we are to gain a true picture of how one of our favourite seabird species is coping with climate change and other factors resulting from human activity.”

Mendelssohn was inspired to compose his Hebrides Overture after visiting Fingal’s Cave.

Long-Bailey vows to support whoever is elected as Labour leader