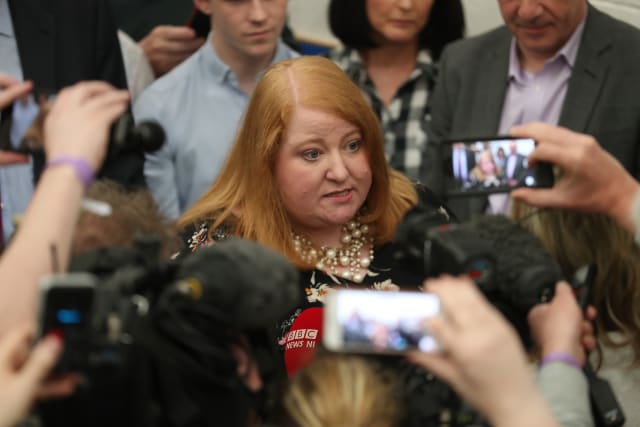 The leader of the Alliance Party claimed Northern Ireland voters are sick of stale politics after sweeping to a stunning success in the European election.

Naomi Long secured the cross-community party’s best ever result after taking the second of the region’s three seats. Incumbent MEPs Diane Dodds of the DUP and Sinn Fein’s Martina Anderson took the other two seats – making it the first occasion Northern Ireland has selected an all-female European line-up.

Mrs Long’s 105,928 first preference vote total was double the 53,052 secured by the Ulster Unionist Party – the once preeminent force in Northern Ireland politics that relinquished a seat it had held for 40 years.

It marked another extraordinary achievement for the politician who has earned a reputation as a formidable electoral performer, having famously dethroned ex-DUP leader Peter Robinson as East Belfast MP in 2010.

She was hugged by husband Michael and jubilant party supporters who chanted “Yes she did” as her election was confirmed at the count centre in Magherafelt, Co Londonderry, on Monday evening.

“I am speechless for once,” she said. “I am really delighted, I am thrilled. I am totally blown away by the result.”

Her voice broke as she thanked the people who voted for her.

“I think people are tired of the fact that the stale politics of the past isn’t delivering and I think what we are offering for people are solutions to the problems we have, not just more problems,” she said.

Pro-European Mrs Long, whose party also recorded significant gains in this month’s local elections in Northern Ireland, said the vote showed that the region still wanted to remain in the EU.

“For those who try to misappropriate it – and try to put it into unionist and nationalist boxes – I am not having that,” she said.

Sinn Fein’s Martina Anderson topped the poll with 126,951 votes, though the party’s share was down more than 3% on the 2014 election.

Mrs Dodds was first elected, on the third stage of the counting, securing 155,422 votes after transfers from eliminated candidates were added.

Mrs Long and Mrs Anderson were elected on the fifth count, after transfers raised their respective totals to 170,372 and 152,437.

Despite the intense focus on Northern Ireland in the Brexit debate, the turnout of 45.14% was down more than 6% from the 2014 election.

The region, which voted 56% Remain in the 2016 referendum, has now two Remain supporting MEPs and one Brexiteer.

Mrs Anderson said the result had sent a strong message to Europe.

“Absolutely delighted, our strategy has worked,” she said.

“We wanted to send a message back to the EU by, in the first instance, topping the poll and, more importantly, sending two Remainers back.

“Fifty seven per cent of the people who voted here voted to remain in the EU and they have sent a strong message back to Europe that they want to stay in the EU.”

Her party president Mary Lou McDonald added: “I think this result is a resounding rejection of Brexit again. It sends the clearest possible message that people here in the north of Ireland have not consented and do not consent to Brexit and I hope London and Mrs May, and whoever will prove to be Mrs May’s successor, hears that message loud and clear and understands that the DUP, while they have a democratic mandate, do not speak for the majority of people who live in the north of Ireland or indeed across the island.”

Mrs Dodds presented a very different analysis of the result.

“People want politicians to honour the result of the 2016 referendum and I will be working along with others to deliver a sensible Brexit deal that is good for Northern Ireland constitutionally and economically,” she said.

Her party leader Arlene Foster welcomed the rise in the DUP’s vote share.

“Of course, we would have preferred to have had two unionist MEPs returned – what we have instead is a nationalist MEP, a very strong unionist MEP and an MEP who identifies as neither,” she said.

“When I look at the votes, which I think is very important, I notice that unionism is still ahead by over 40,000 votes and of course I am very pleased about that.

“Obviously we would have preferred to see two unionist MEPs returned but I am absolutely delighted with our turnout today and the fact our vote has increased again.”

Asked to explain the Alliance surge, Mrs Foster said there were a number of factors, including a low turnout and her contention that some people who voted Leave felt it unnecessary to register their view a second time.

“We found that when we spoke to people they said ‘we have already voted, we told you what we want, we want out of Europe’,” she said.

SDLP leader Colum Eastwood, who had been hoping to win back a seat former leader John Hume held for 25 years, notched 78,589 first preferences.

UUP candidate Danny Kennedy limped in sixth in the first round, behind the leader of the Traditional Unionist Voice party Jim Allister, who scored 62,021 votes.

All five were eliminated after the first stage of counting, with their transfers being distributed to candidates still in the race in the second round.