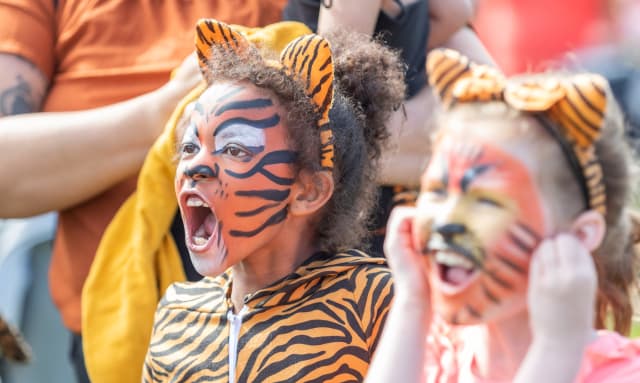 Knowsley Safari has staged its first Tiger Parade to raise awareness of the plight facing the endangered Amur tiger.

A band of 500 animal lovers dressed as tigers at the park in Merseyside to reflect that there are only 500 of the big cats left living wild in eastern Russia under threat from poaching and deforestation.

The parade passed through the safari’s tiger trail, opened 12 months ago, which forms a 10,000 square metre natural habitat that is home to two Amur tigers, sisters Sinda and Bira.

Visitors to the trail can learn about efforts to stabilise and eventually increase the Amur tiger population.

Sinda and Bira joined the safari as part of a European breeding programme in 2010.

Safari spokeswoman Verity Dann said: “Today we celebrate the one-year anniversary of our tiger trail opening but more importantly we are trying to raise awareness for the plight of this lovely big and dangerous cat.

“There are only 500 left in the wild which is why we invited 500 ‘tigers’ here to try and raise more awareness of the poaching and deforestation problems facing our cats today.”