May latest Tory PM to be toppled over Europe 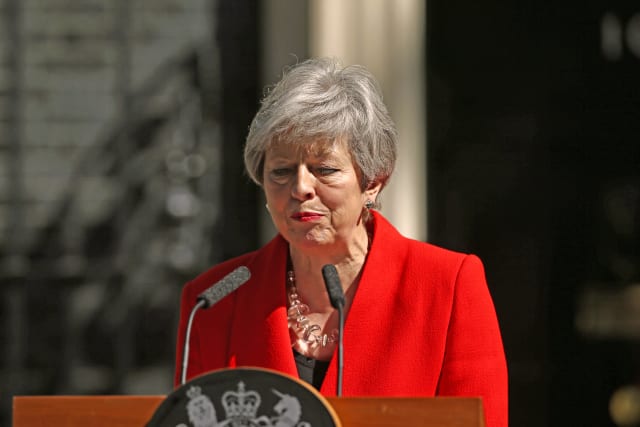 It all ended in tears as Theresa May became the latest Tory premier who failed to manage the party’s divisions over Europe.

The Prime Minister’s emotional speech announcing her decision to quit means she becomes the fourth Conservative prime minister in a row to have suffered over the relationship with Europe.

After more than 11 years in office, Mrs Thatcher was forced out of Number 10 in November 1990.

Although other issues, including the hugely divisive poll tax, played a part in her downfall, ultimately it was divisions over Europe which forced her out of office.

Geoffrey Howe’s resignation speech after quitting as deputy prime minister over Europe paved the way for Mrs Thatcher’s own departure within weeks.

In a scathing statement, he told MPs “the prime minister’s perceived attitude towards Europe is running increasingly serious risks for the future of our nation” and he argued that her Eurosceptic approach was damaging efforts to cooperate with the European Economic Community.

Like Mrs May, she shed a tear as she left office following a revolt by her own ministers.

Sir John faced huge problems with the Eurosceptic wing of the Tory Party, including three Cabinet ministers he called “bastards” in comments picked up by a TV microphone.

Sir John’s running battles with the Eurosceptics led him to issue a “put up or shut up” challenge, resigning as Tory leader to force a contest in 1995 in which he comfortably defeated John Redwood.

The divisions in his cabinet saw senior ministers, including close friend Michael Gove, campaign for Brexit as Mr Cameron fought on the Remain side.

A Cabinet mutiny over her final attempt to get a Brexit deal through and the prospect of another backbench bid to oust her meant the Prime Minister was forced to set the date for her departure.

Mrs May said she had done “everything I can” to persuade MPs to back her Brexit deal, but in the end it was nowhere near enough.

“It is and will always remain a matter of deep regret to me that I have not been able to deliver Brexit,” she said in her tearful resignation statement.

Whoever replaces the Prime Minister will still have the task of getting the UK out of the EU, with the same challenging parliamentary arithmetic that prevented her from succeeding.

In a message apparently aimed at hardline Brexiteers such as Boris Johnson or Dominic Raab, Mrs May said her successor must find a consensus in Parliament for their approach.

“Such a consensus can only be reached if those on all sides of the debate are willing to compromise,” she added.

The European Union indicated it remained unwilling to consider reopening the legal text of the Withdrawal Agreement thrashed out by Mrs May over months of negotiations.