Theresa May’s fate as PM could be decided on Friday 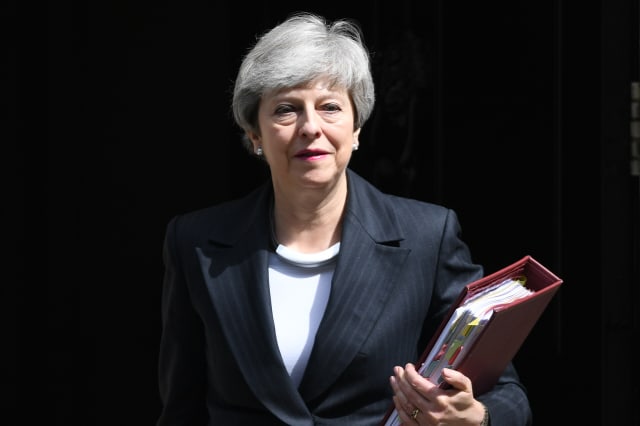 Theresa May’s fate as Prime Minister looks set to be sealed on Friday when she meets the Tory grandee who speaks for Conservative backbenchers.

As the leadership crisis intensifies, the Prime Minister will hold discussions with Sir Graham Brady, chairman of the powerful 1922 Committee of Conservative MPs, with clamour growing for her to quit.

Demands from Tory MPs for Mrs May to resign are continuing to surge following Cabinet turmoil over her Brexit strategy.

Pressure is mounting on Mrs May after Commons Leader Andrea Leadsom stormed out of Government in protest at the PM’s EU withdrawal plan.

Previously viewed as a loyalist, the Bexleyheath and Crayford MP used European Parliament election day to insist Mrs May must go.

He tweeted: “Theresa May must now resign. We need a new PM a new Cabinet and a new approach to Brexit.”

Mrs May’s meeting with the 1922 Committee chairman looks pivotal to how her premiership ends.

She has previously agreed to set out the timetable for the contest to replace her after a crunch vote on her Brexit deal, widely expected on June 7.

That deadline appears to have been brought forward with the announcement she will meet Sir Graham the day after the EU vote in which polls suggest the Tories will be hammered by Nigel Farage’s Brexit Party.

Sir Graham told reporters: “I will be meeting with the Prime Minister on Friday following her campaigning in the European elections… and following that meeting I will be consulting with the 1922 executive.”

He said the executive discussed “all sorts of things” in the meeting.

The 1922 Committee’s executive had been expected to consider a rule change to allow another attempt to force Mrs May out.

Following the failed bid to oust her in 2018, under existing rules Mrs May would be safe from another confidence motion until December.

Reports suggest the committee’s executive took a secret ballot on bringing a confidence vote forward, and could release the results if Mrs May fails to set a firm exit date on Friday.

Defence Secretary Penny Mordaunt, a prominent Brexiteer, told reporters: “I have given my advice to Number 10 and today I am going to be getting on with my job which is to keep the country safe and look after our armed forces.”

The Cabinet turmoil intensified after Mrs Leadsom said she resigned with a “heavy heart”, adding she no longer believed the Government’s approach would deliver on the referendum result to leave the European Union.

The PM, writing in reply, disagreed with the ex-minister’s assessment, but said she was sorry to lose someone of Mrs Leadsom’s “passion, drive and sincerity”.

“I do not agree with you that the deal which we have negotiated with the European Union means that the United Kingdom will not become a sovereign country,” Mrs May said.

She agreed a second referendum would be divisive, but said the Government was not proposing to hold one.

Mrs Leadsom acknowledged her resignation came on the eve of the European elections, but said she felt she could not announce the Withdrawal Agreement Bill (WAB) in Thursday’s Business Statement containing “new elements that I fundamentally oppose”.

“I fully respect the integrity, resolution and determination that you have shown during your time as Prime Minister,” she wrote in a letter to the PM.

“No one has wanted you to succeed more than I have, but I do now urge you to make the right decisions in the interests of the country, this Government and our party.”

Listing her reasons for resigning, Mrs Leadsom said she did not believe the UK would be “truly sovereign” through the deal proposed, and a second referendum would be “dangerously divisive”.

She added there had been “such a breakdown of government processes” that recent Brexit-related legislative proposals have not been “properly scrutinised or approved by Cabinet members”.

“The tolerance to those in Cabinet who have advocated policies contrary to the Government’s position has led to a complete breakdown of collective responsibility.”

Mrs Leadsom was one of a number of Brexit-supporting colleagues in the so-called Pizza Club who were absent for the start of Prime Minister’s Questions on Wednesday.

She told reporters it had been a “really tough day” but she still found time for social media pleasantries with her former special advisers and Labour MP Jess Phillips.

After Ms Phillips said she had “liked” Mrs Leadsom and praised her work on Commons complaints and proxy voting, the Tory replied “like you too Jess”.

In a sign of unrest at the highest levels of the Tory party, a series of Cabinet ministers asked for meetings with Mrs May to raise their concerns about the WAB which would put the Prime Minister’s Brexit plan into law.

Downing Street sources said the PM could meet Foreign Secretary Jeremy Hunt on Thursday, but there was no confirmation that an audience would be granted for other ministers with reservations about the plan.

Home Secretary Sajid Javid has asked for a meeting to discuss his concerns about the prospect of a second referendum, after Mrs May revealed she would grant MPs a vote on whether the Brexit deal should be put to the public.

Scottish Secretary David Mundell also has particular concerns because he fears the prospect of another referendum could be “exploited” by the SNP to call for a fresh independence vote.