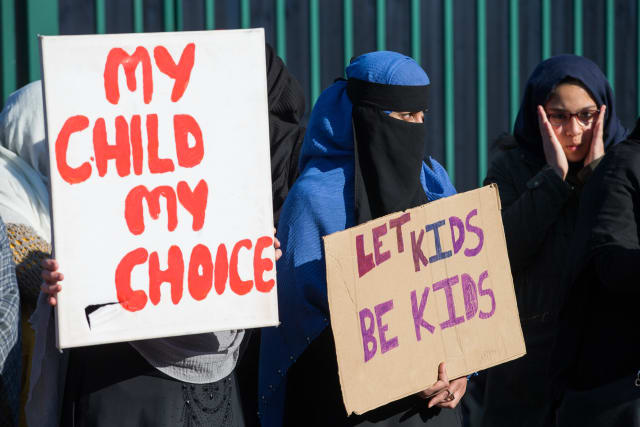 A primary school at the centre of parent protests against LGBT teaching is to close early on Friday over safety fears, ahead of a planned demonstration.

The decision, taken by the school’s headteacher with support of staff and city council officers, means Anderton Park Primary School in Birmingham will be shutting its doors at lunchtime for the half-term break.

It comes after weeks of demonstrations outside the gates of the Dennis Road school.

On Sunday night, police were called after counter-protesters were reportedly egged while putting up banners in support of the school.

Welcoming the “extremely difficult decision” to close early, Birmingham City Council leader Ian Ward said the first priority is the safety of pupils, families and staff, as protests had “escalated significantly” over the past week.

On Tuesday, West Midlands Police Chief Constable David Thompson called for a halt to protests, and for fresh talks between school leaders and some parents who have objected to elements of Anderton Park’s relationship education.

That followed what the senior police officer called a “number of criminal offences” near the school on Sunday night.

Mr Thompson said: “Frankly, a primary school is no place for the continuance of a large scale protest, however lawful.”

The force received reports of assaults and criminal damage, with counter-demonstrators complaining they were egged after hanging up signs and placards on the school’s gate, some of which read “love is the answer”.

The main organiser of the protests is Shakeel Afsar.

Mr Afsar’s children do not go to the school, but his niece and nephew do.

He has said that without further “mediation” between parents, the school and the council, the latest pre-planned rally will be going ahead on Friday.

Mr Afsar has claimed demonstrations are continuing because the school is using “children as pawns” by teaching LGBT equality which are “over-emphasising a gay ethos”.

He has rejected allegations the protests are homophobic, claiming the school should respect the protesters’ “moral beliefs”.

In early May, he was given a legal warning by the council not to interfere with the school’s operation, but he has continued to attend demonstrations.

He has also questioned the legality of the council’s notice.

In an exchange outside the school on Monday, Labour MP Jess Phillips told Mr Afsar demonstrators could not “pick and choose” which equality they apply.

However, constituency Labour MP Roger Godsiff has since said he “understood” parents’ concerns over whether all the material is “age appropriate” for four and five-year-olds.

Reacting to the decision to close early, Mr Ward said “I support the extremely difficult decision that has been taken to close Anderton Park School at lunchtime on Friday.

“This decision was not taken lightly but protests outside the school have escalated significantly over the past week and our first priority must always be the safety of pupils, families and staff.

“Birmingham City Council is continuing to work with the police to ensure that measures are put in place to support the Anderton Park community when school reopens on Monday June 3, and I urge parents to engage with the school if they have concerns about equalities education.

“The staff and pupils of Anderton Park have shown remarkable resilience in the face of increasingly unpleasant protests over recent weeks. I would like to thank Sarah Hewitt-Clarkson and all the school staff for their hard work and wish them a relaxing half-term break.”

The council has said it is looking into whether it could employ a public space protection order to move demonstrations away from the school.