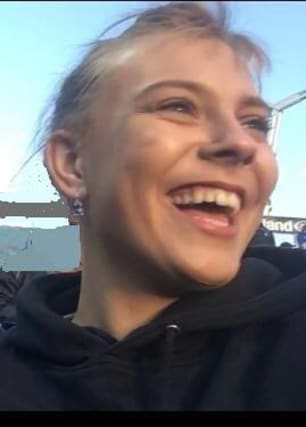 Semen staining on a top found at the scene where schoolgirl Ana Kriegel’s body was discovered contained the DNA of one of the boys accused of her murder, a court has heard.

The semen stains were found in two areas of the black vest top, on the upper right shoulder area close to the strap and at the bottom of the top, the Central Criminal Court in Dublin heard.

Marce Lee Gorman, of Forensic Science Ireland, examined the black top, which she said was torn and badly damaged, with parts of the fabric pulled and stretched.

Ana’s naked body was found in a derelict house in Lucan, Co Dublin, days after she went missing in May last year.

Two 14-year-old boys, who cannot be identified due to their age, are standing trial accused of her murder.

Boy A has pleaded not guilty to murder and sexual assault “involving serious violence” of the schoolgirl.

Boy B has pleaded not guilty to murder.

Ms Lee Gorman, who has more than 30 years’ experience working in DNA cases, examined the 14-year-old’s intimate swabs and clothing for the presence of semen and blood.

The witness told prosecuting counsel Brendan Grehan SC that she examined the black top, which was found near the corner of the room where Ana was discovered, and found DNA from skin cells and semen staining.

The mixed DNA profile matched that of Ana and Boy A and a third unknown source.

She cut the pieces of fabric containing the semen from the top and examined them under a microscope.

“The rest (of the top) had been damaged prior to that. It is cut completely down one side,” she said.

Ms Lee Gorman said there was nothing unusual about Ana’s DNA being present.

She said there were two possibilities – that the DNA was Ana’s and Boy A and an unknown person, or unknown people unrelated to Ana.

Ms Lee Gorman estimated that it is one thousand million times more likely that it originated from Ana and Boy A and an unknown person rather than three unknown people.

She was not able to say when the semen was deposited on to the top but that it was “categorically there” since it was last washed.

The top was extensively damaged, with the right shoulder strap stretched and pulled.

The stitching had been pulled and stretched and the fabric was torn on the right side.

She said the hem line was completely torn.

“The stitching is undone and completely severed on the left shoulder strap. It has snapped,” she added.

“One shoulder strap is stretched and the other is snapped and the entire side is ripped.

“The left shoulder is torn in two pieces, with one attached to the top.”

Ms Lee Gorman said that force was required to cause this damage.

She also examined Ana’s bra and found that the fabric between the cups was torn apart and that the hooks on the bra clasp were stretched and bent, “possibly by pulling”.

Ms Lee Gorman said that force was required to cause this type of damage.

She added: “The fasteners at the back have been forced and bent in the process and the front is completely apart. That would have required force.”

Blood stains were also found on the front of the left cup, right strap and close to one of the hooks. These all matched Ana’s blood.

Ana’s black hoodie was also examined and found to have blood staining on the upper front of the hoodie and back of the left sleeve.

Some blood was also found on the inside of the front.

The witness also examined Ana’s black leggings and pants and found blood stains on the crotch area of her leggings.

Ana’s blood stains were also found on her black boots.

Her socks, which were removed from her body during the post-mortem examination, had blood stains and dirt stains on them.

Ms Lee Gorman said there was a “small quantity” of male DNA inside both socks but was not able to determine a match.