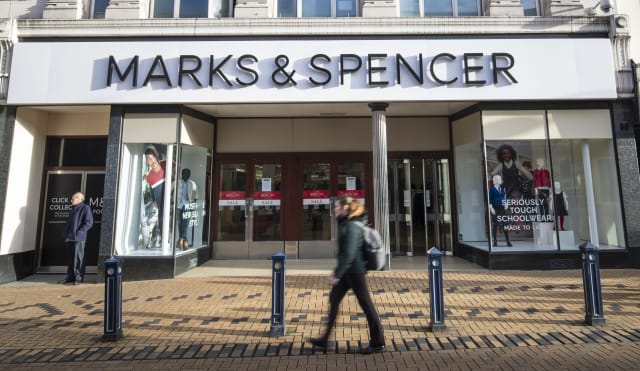 Marks & Spencer is set to reveal a decline in full-year profits, as it was held back by falling food sales in the latest quarter.

M&S pre-tax profits for the year are predicted to fall by 11% year-on-year to £519 million, according to analyst consensus.

Analysts have predicted that like-for-like food sales for the full-year will decline by 2.4%, with like-for-like clothing and home sales expected to drop by 1.4% for the period.

Analysts at Jefferies are pencilling in a 3.1% slump in food sales in the fourth quarter after it was impacted by the late timing of Easter compared with previous years.

It has been a tough year for the High Street stalwart, accelerating restructuring plans while profit estimates have fallen lower.

While food sales for the three months to March are expected to highlight accelerated sales decline, its clothing and home segment is expected to report a 0.4% fall, representing an improvement from a 3.4% drop in the same quarter last year.

Analysts at AJ Bell said: “It has been another tough 12 months for M&S as the company has accelerated its restructuring plans, seen profit estimates gradually slide lower, cut its interim dividend and announced a fund raising.

“The shares are trading very close to their financial crisis lows of 2008, although for all of that, they are only down by 4% the past year, which is better than the FTSE 100’s 6% drop.”

Wednesday’s full-year results come amid speculation that the firm is looking to double the size of its food business, with significant investment.

The firm’s aim to establish itself as a retailer for more regular family food shops also resulted in it securing a new digital joint venture with Ocado.

To fund its investment in the deal with Ocado, Marks & Spencer said that it will conduct a rights issues with the goal of raising £600 million.

The company has already announced that it expects to cut its shareholder dividend by about 40% this year.

The retailer surprised the market after revealing a jump in half-year profits, but warned investors of a bleak outlook for sales growth as revenues declined for the period.

Half-year revenue dropped by 3.1% to £4.96 billion, reflecting declining sales in both the food and clothing and home divisions.

The retailer reported a 62.1% decline in pre-tax profits for the previous full-year, up to March 2018, as more than £300 million in costs from its store closure programme dragged it down.