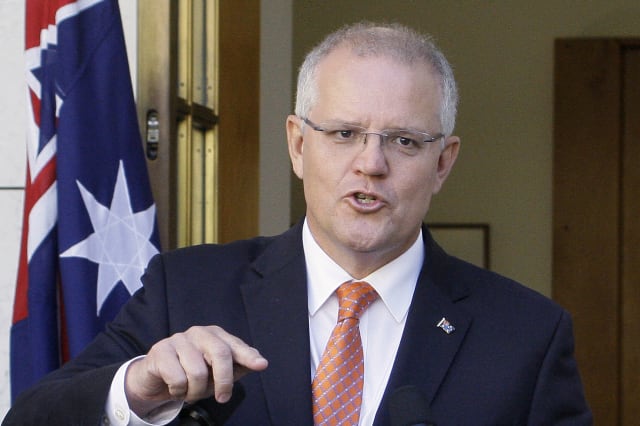 Australia's ruling conservative coalition has won a surprise victory in the country's general election, defying opinion polls that had tipped the opposition party to oust it from power.

Vote counting will continue on Sunday, but poll forecasts give 74 seats to Mr Morrison's coalition, with 65 to Labour and 12 undecided.

A total of 76 seats are needed to form a majority government.

Mr Shorten, 52, told distraught Labour supporters: "It is obvious that Labour will not be able to form the next government and so, in the national interest, a short while ago I called Scott Morrison to congratulate him."

Mr Morrison, 51, said he had never given up hope of staying in power, despite the opinion polls.

Addressing a jubilant crowd of supporters in Sydney, a beaming Mr Morrison compared his party's victory with the births of his daughters, Abbey, 11, and Lily, nine, who were conceived naturally after 14 years of IVF treatment had failed.

"I have always believed in miracles," Mr Morrison said.

"I'm standing with the three biggest miracles in my life here tonight, and tonight we've been delivered another one," he said, embraced by his wife, Jenny, and daughters.

The tight race had raised the prospect of the coalition forming a minority government.

The conservatives became a rare minority government after they dumped Malcolm Turnbull for Mr Morrison in an internal power struggle last August. The government then lost two seats and its single-seat majority as part of the blood-letting that followed.

Pre-election opinion polls had suggested the coalition would lose its bid for a third three-year term, and that Mr Morrison would have had one of the shortest tenures as prime minister in the 118-year history of the Australian federation.

There was so much public confidence of a Labour victory that Australian online bookmaker Sportsbet paid out 1.3 million Australian dollars (£690,000) to punters who backed Labour two days before the election.

Mr Morrison is the conservatives' third prime minister since they were first elected in 2013.