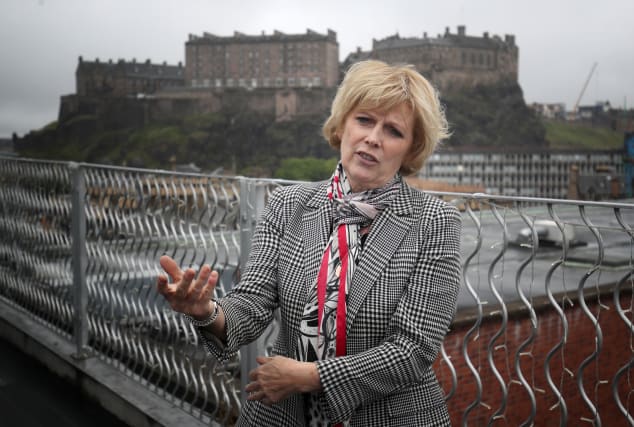 Politicians who do not stand up for what they believe in have broken British politics, Anna Soubry has said.

The MP said her Change UK party is the only one which can fix the political system, and she called for voters to “be courageous, have that courage of your convictions and say enough is enough”.

On the European election campaign trail in Edinburgh on Saturday, Ms Soubry said: “We are believers in change, changing UK politics, making it less tribal, something that in Scotland you’re well familiar with – the terrible tribalism that afflicts politics in Scotland.

“The other thing that’s got to change is making policy based on ideology and not actually looking at the evidence. Being honest with people about the tough choices and doing policy for the right reasons, rather than a cheap soundbite.”

Criticising politicians who “won’t stand up and say what they believe”, the former Conservative MP added: “That lack of honesty has led us into this terrible, terrible crisis.”

She suggested Scotland voted to remain in the EU because it “understands the huge positive values of immigration. You get it, as a country”.

She added: “If you make the case, you win hearts and minds on immigration because you do make the argument and you win the argument because immigration has benefited Scotland and the whole of the United Kingdom.”

Commenting on reports that Brexit Party leader Nigel Farage has refused the challenge of a debate with Change UK counterpart Heidi Allen, Ms Soubry said: “The one thing that Mr Farage can’t cope with is when he is confronted with the facts, the evidence and the arguments.

“I’m afraid he likes to rely on fuelling fear and preying on people’s prejudices.”

Ms Soubry also called out Scottish Conservative leader Ruth Davidson as someone she believes should be campaigning for a people’s vote.

“She was a remarkable advocate – strong, brave and true – during the referendum campaign. She stood out in her determination to speak truth to the growing power of intolerance and abuse that was growing throughout that campaign.

“I would say to Ruth, I don’t believe for one moment that your views on the European Union have changed.”

Ms Soubry admitted Change UK has had “a bit of a tough week” following the defection of the lead candidate in Scotland, David Macdonald, who came out to endorse the Lib Dems, and the removal of another for controversial posts on social media.

Among the remaining candidates standing for the party are two doctors – GP Kate Forman and consultant pharmacist Cathy Edgeware – and aviation expert Peter Griffiths, who is now in effect the party’s lead candidate.

Dr Forman said: “I’ve never been involved in politics before but my concerns about the damaging effects that Brexit will have on the health and wellbeing of my patients have compelled me to act.

“I see first-hand the effect austerity has on my patients, up until three years ago I had never referred anyone to a food bank, but now I regularly do so.”

She warned Brexit threatens the number of doctors and nurses in the NHS, and said: “Staff are already stretched to the limit and I see the negative effect this has on the overall mental wellbeing of myself and my colleagues. Brexit is likely to exacerbate these problems.”