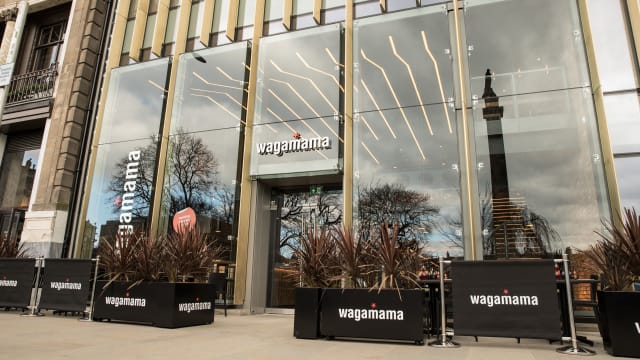 The Restaurant Group has hailed a surge in sales at the start of 2019, buoyed by its acquisition of Wagamama.

The FTSE 250-listed group, which also owns Frankie & Benny’s and Chiquito, reported a 2.8% jump in group like-for-like sales in the 19 weeks to May 12 ahead of its annual general meeting (AGM).

Total sales surged 57% over the period as it continued to benefit from the pan-Asian restaurant chain it bought for £550 million last year.

It also benefited from a “record number” of new pubs and concessions sites opening in 2018, the company said.

Wagamama “continued to significantly outperform in its core UK market” and its pub business also delivered a strong performance, it said.

The group’s deal to purchase Wagamama sparked controversy, with more than 40% of its shareholders opposing the move.

The Restaurant Group added that it is “comfortable” with its performance since the start of 2019 and is focused on “realising the synergies from the Wagamama acquisition”.

Wagamama also revealed on Friday that the chain, which has 134 outlets across the UK, has outperformed the UK market every week for the past five years according to an industry sales tracker.

The Coffer Peach Business Tracker, which monitors sales from 39 operating groups across the pub, bar and restaurant sector, revealed the chain performed ahead of the market average for the past 260 weeks.

Emma Woods, chief executive officer of Wagamama, said: “The Wagamama team are unbelievably chuffed to have reached the five-year milestone of outperforming the Peach tracker.

“There are plenty of commentators who will happily tell you that this sector is doomed, but today we stand proud and say this needn’t be the case.”

Shares in the Restaurant Group slipped by 0.5% to 129.1p in morning trading.